The Story Of A Great Admiral 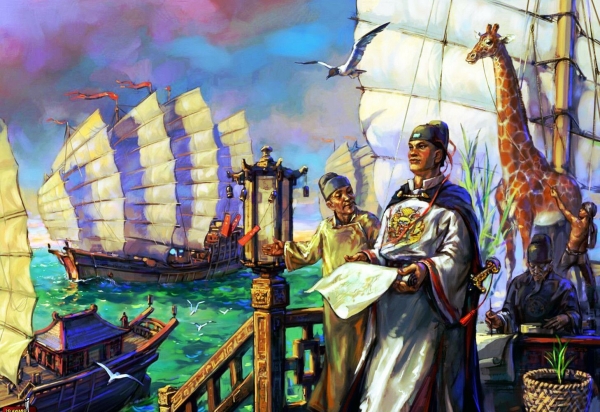 You do not know him. The Turkish Naval Forces do not know him too. Because there is no commissioned officer to deal with the Turkish and Islamic world. Especially in the process of 28 February 1997, a great discharge was carried out by expelling all the soldiers who were knowledgeable about this issue one by one.

You cannot hear his name from the Ministry of Education, Turkish Historical Society and official institutions dealing with maritime history. Because they are not interested in sayyids who descendants of Prophet Muhammad Aleyhissalatu Vesselam are. They are only busy polishing the invented heroes.

There are very few people in the world who know this great admiral and understand his mind-boggling great expeditions. Thanks to this article, you will have learned a few about him.

Great Admiral Zheng He is one of the world's greatest sailors trained by Turks and Arabs. His real name is Muhammed Hasan Şemsettin. His grandfather came from Bukhara. Arabs know him as Mahmut Hasan Şems. He is known as Ma He and San Bao in the Far East and China.

Emperor Yonglo, the most important Ming Dynasty of China, gave him the title of "Zheng" for his success in state administration. For this reason, he is known as "Admiral Zheng He" in Chinese historical records and Far East countries.

Many people around the world heard of him for the first time at the 2008 Beijing Summer Olympics. The Chinese State has expressed the great admiral for his seven great sea expeditions and his contributions to world peace. That's how I got to know Zheng He and I tried to compile a book by collecting the studies on him.

You can learn more from this book, which will soon be among the books of Kitapyurdu which is published by Doğrudan Yayıncılık. For this reason, let me try to give a short summary for now.

Known as the Pioneer of the Age of Discovery, the life story of Admiral Zheng He is unique. He has a rich and adventurous history which is worth to be the subject of marvelous scenarios. The Muslim Admiral is one of the most important sailors of the age of discovery that will occur a century later.

Zheng He began his explorations in 1405, 87 years before Christopher Columbus, 92 years before Vasco da Gama, and 114 years before Ferdinand Magellan. So much so that, in 7 expeditions between years of 1405 and 1433, he made a big difference in terms of fleet and number of sailors compared to other explorers. 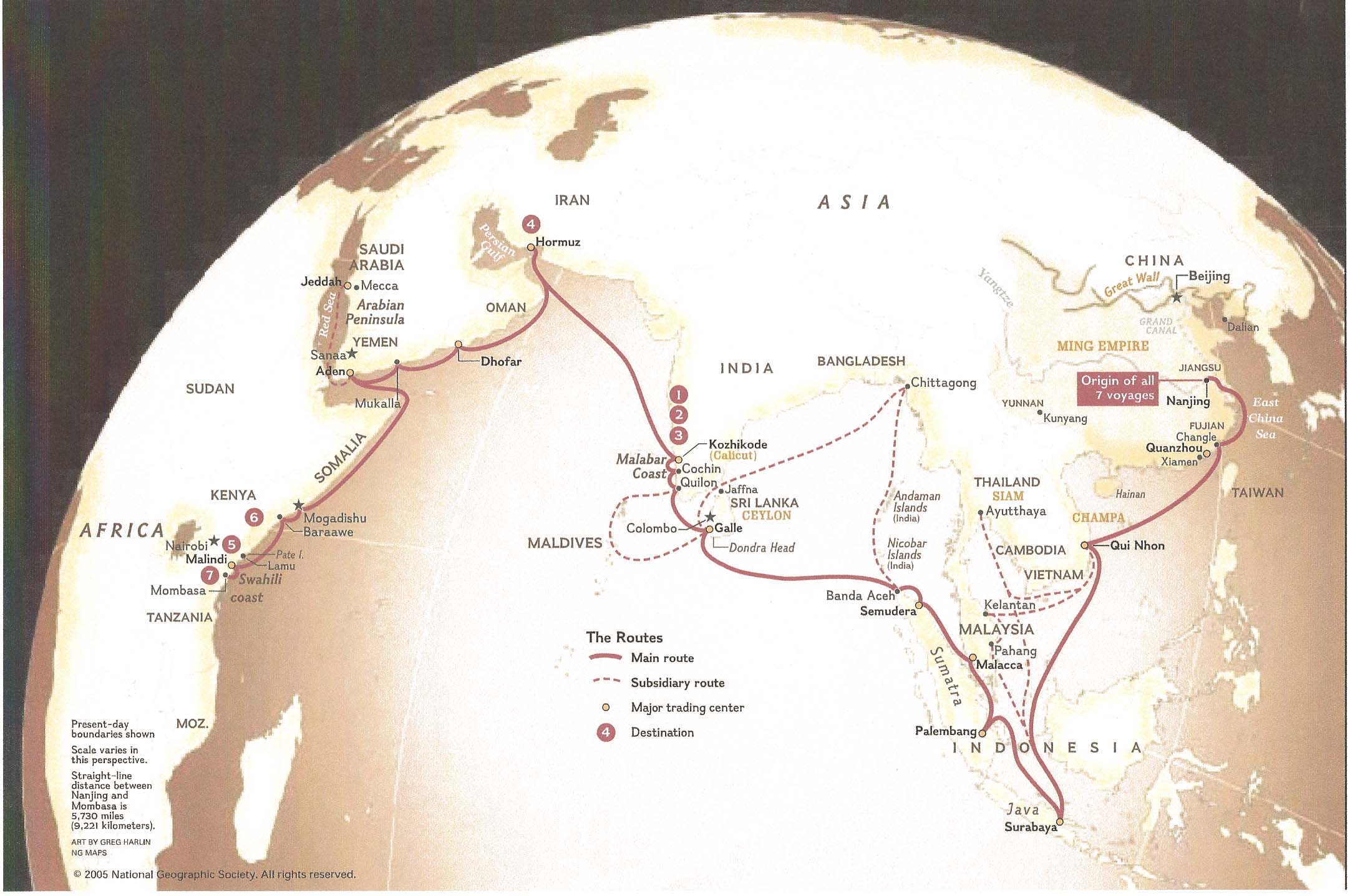 While the Westerners did not know what a compass was, Zheng He was making transoceanic voyages using his astronomical methods. Moreover, he developed methods to skillfully command the very large naval fleet.

While Zheng He set out with 317 ships and a crew of 28 thousand; Columbus set out with 3 ships of 90 people, Gama with 4 ships of 160 people and Magellan with 5 ships of 265 people. He successfully completed his long journeys of 160 thousand miles in 7 expeditions thanks to his superior skills in maritime. The Ottoman Empire was experiencing the Interregnum period due to Timur's defeat in 1402.

Zheng He's travels in the Indian and Western Pacific Oceans reached the coasts of China, South Asia and East Africa. Economic and cultural relations developed between the countries of the region with these expeditions. But most importantly, it helped the Indonesian Islands to meet Islam.

Zheng He was an admiral who worked very hard for the spread of Islam in the South East Asian islands, especially in Java. It not only cleared the area of pirates, but left hundreds of mosques and schools behind.

In 1411, while mosques were being built in Andro, Cirebon, Tuban, Gresik, Ruoban and Jakarta, the people of the region flocked to Islam. He visited these mosques and prayed with his assistants Ma Huan and Fei Xin. Javanese used to describe Islam in Chinese in the Old Port and West Kalimantan regions.

He gave him a silver stamp, crown and cape, which appointed Jayavarman as King in Malacca. In this way, the Malay people became Muslim, and Malacca became both center of trade and Islam.

He was born into a Muslim family during the Ming dynasty in China in 1371. His birthplace was a town called Hedai in the city of Baoshan in present-day Yunnan province.  He is the sixth-generation grandson of Sayyid Eclel Shams al-Din Omer, who lived between 1211 and 1279. He is the 31st generation son of the Prophet (pbuh).

Zeng He’s grandfather and father visited Mecca and became pilgrims (Tianfang in Chinese). He also went on the pilgrimage. Because, throughout his childhood, he followed his family's pilgrimages with interest and a love of spreading Islam was born within him. He learned Arabic and trained himself in Islamic sciences.

In 1382, when Zheng He was just 12 years old, the Mongol Yuan Dynasty was occupied by the Ming Dynasty armies. Zheng He, who lost his father in Yunnan, was taken as a prisoner to Nanjing, where he entered the service of Prince Zhu Di. Despite being the fourth child, Prince Zhu Di became the third emperor of the Ming dynasty in China in 1402, with Zheng He's help. Changing his name to Yonglo when he became emperor, the King brought Zheng He to the head of the navy for his outstanding achievements.

China was trying to put its weight on neighboring countries at that time with a policy that we can call "panda diplomacy" today. Chinese porcelain and silk were among the most valuable items in the world. With the revitalization of the Maritime Silk Road by Admiral Zheng He, China's copper coins became the world's most valid coin.

The warships tasked with protecting Zheng He’s merchant fleet were enormous, and when it appeared, it immediately deterred enemy nations. The recent visit of Chinese President Xi Jin Ping with the Prime Minister to the pandas in Germany; it is actually nothing more than the panda diplomacy that Zheng He practiced centuries ago.

As part of its diplomacy tradition, China continues this method by sending a pair of pandas to countries where relations are strained or friendship is desired to be reinforced.

Cute pandas also have the power to soften state relations and strengthen the image of the country. This interesting method of China started in 1957 with the bear named Ping Ping, which was gifted to the Soviet Union. Currently China's; There are 12 pandas in the USA, 8 in Japan, 4 in Singapore, 3 in Malaysia and Spain, and 2 in each in England, France, Germany, Belgium, Austria, Canada, Australia, Netherlands and Thailand. There is a total of 48 diplomat pandas.

Admiral Zheng He, a Chinese Muslim, is one of the rare figures in history who proved what he could do to spread Islam no matter what difficulties he faced. It is admirable that he has served Islam with the secular ranks he has earned through his hard work and perseverance. It is our duty to research his life story and to establish institutes on his behalf at universities. See what has been said about Zheng He:

Dutch J.J.L. While Duyvendak praises these travels in the 15th century, British historian Joseph Needham puts forward Zeng He as the most important person in Chinese history. On the other hand, Japanese Terada Takanobu claims that the travels of that century are the greatest achievements of mankind. He says that the achievements of the age of discovery "pale" when compared to what Zheng He did a century ago.

We must develop policies that protect the interests of Uyghur and Chinese Muslims. It is possible to get a positive response from China, which is trying to develop Panda diplomacy. On the other hand, it is not wise to be an instrument to the US's provocative policies due to trade wars.

Last modified on Wednesday, 18 November 2020 10:47
Tweet
Published in News From The Islamic World

More in this category: « Family Rights Agreement Instead Of Istanbul Convention
Login to post comments
back to top