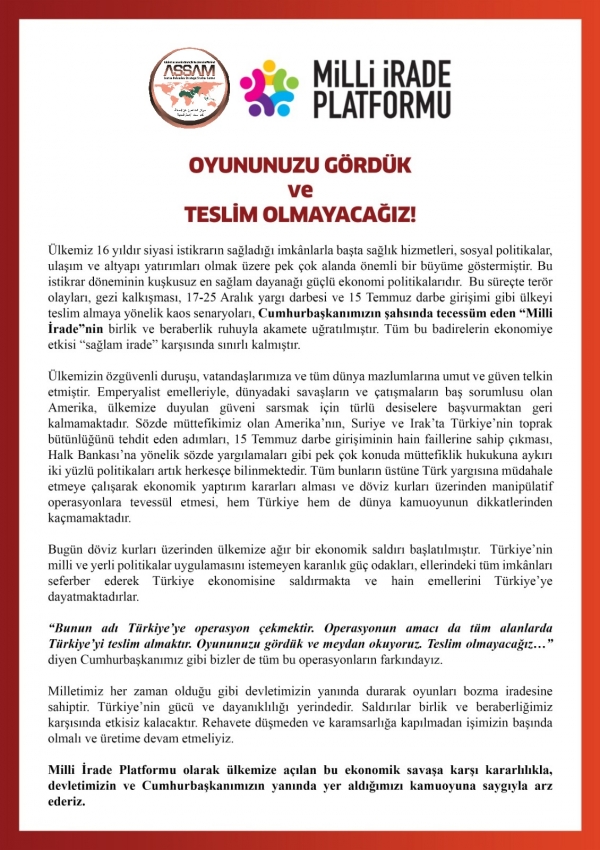 CONTINUE For a Strong and Great Turkey

On Sunday June 24, 2018, about 55 million voters will go to the ballot box to elect the president of the Republic of Turkey and the deputies who will serve in the Turkish Grand National Assembly for the first time under the new system, which it previously approved by referendum. Our people have been an example to many world states by identifying the party they want to form a government and its proxy candidate with their free will since the day of the transition to the multiparty period. At the point of holding elections and reflecting the will of the voters to the ballot box, our country has reached a maturity that will be shown with finger.

As the ASSAM, we publish the following statement under the umbrella of the National will Platform, which we are a member of it.

Professor Dr. Tahsin Görgün is Head of Philosophy Department at 29 May University and  gives  lectures  at ILEM. From the fiqh to the history of Islamic thought and to philosophy, wide range of subjects are among the main interested areas of Prof. Dr. Gorgun.

The title of our conference was "The Place of Islamic Civilization in World History". We are sharing our notes... 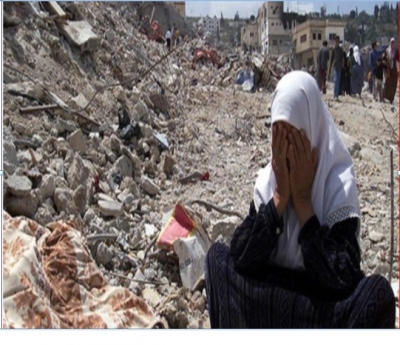 65 civilians died who gathered on Gazza frontier because of Israel’s attack with real bullets and gas bombs. 2500 civilans injured. {Nakba Day(Big Catastrophe= The day when Israel expelled the Palestinian people from their lands)}

The attack made by use of disproportionate force againest Palestinian civilians caused great indignation in the geaography of Islam. Thus President Receb Tayyip Erdogan called Organization of Islamic Coopreatin(OIC) for an extraordinary meeting. Jerusalem declaration accepted in the meeting held in İstanbul. 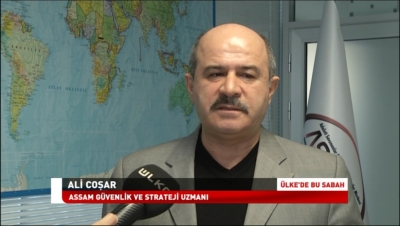 The interview made Upon the conquest of Afrin’s center by TAF & FSA, by Ulke Tv Correspondent Ebru Kaçar with ASSAM Strategy and Security Specialist Ali COŞAR in 19 March 2018 was featured on Haber Kuşağı(In The News) program.

Adnan Tanrıverdi chief advisor of The President and board chairman of ASSAM, was a guest on Ulke TV

Adnan Tanrıverdi chief advisor of The President and board chairman of ASSAM, was a guest in the İnce Fikir (Thin Idea) program on Ulke TV and evaluated the agenda regarding Olive Brach Operation.

The Olive Branch Operation which took place in Afrin, was discussed in the ‘Memleket Meselesi’ Program with participation of İsmail Hakkı Adebalı Mayor of Yıldırım, Adnan Tanrıverdi chief advisor of The President, Mete Yarar Security Politcs Expert and Prof. Dr. Fahrettin Altun, by moderation of Erkan Tan who loved by tv-audiences.

State And President In Islam 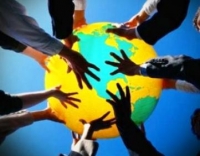 State, as known: is an organized form of political dominance belong to a human community within certain boundaries. Islamic States Presidents called as Khalifa, Imam, Emir’ul-Muminin, Ulu’l-Emr, Melik, Sultan and Padishah throughout the history. Islam is both a Religion and a State. It is the World and also Afterlife. Can not be separated from each other.

The interview which made with UNIW Secretary General Mr. Ali Kurt about ASSAM during his visit our stand at 2nd International NGO Exhibition. The exhibition took place at İBB Yenikapı Show Center on 9-10 December 2017.

The interview which made with Chadian Dr. Yahya ABDULLA AHMED  about ASSAM during his visit our stand at 2nd International NGO Exhibition. The exhibition took place at İBB Yenikapı Show Center on 9-10 December 2017.
Published in News
Tagged under
Read more...
Thursday, 14 December 2017 00:00

The interview which made with Egyptian Mrs. Sahar ZEKİ about ASSAM during his visit our stand at 2nd International NGO Exhibition. The exhibition took place at İBB Yenikapı Show Center on 9-10 December 2017.

The interview which made with Ivorian Mr. Suleyman Konferm about ASSAM during his visit our stand at 2nd International NGO Exhibition. The exhibition took place at İBB Yenikapı Show Center on 9-10 December 2017.

Published in News
Tagged under
Read more...
Page 16 of 17