The Power That Brought Biden to His Knees!.. ‘Jewish Nazism-Political Zionism’ 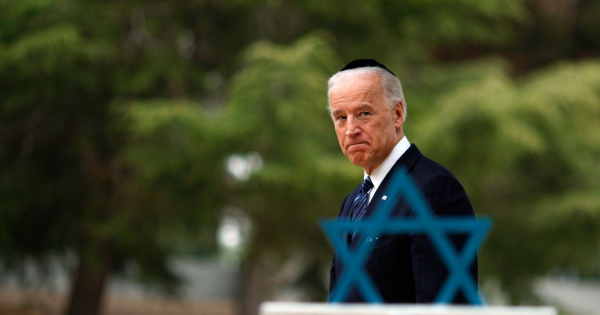 Louise Marchalko is one of those who can accurately analyze Jewish reality. Originally from Hungary, Marchalko is known for his ideas about Bolshevism and ideas on who is the insidious force behind wild Capitalism. In 1945, the Bolsheviks were forced to leave their country before they had invaded Hungary. I strongly recommend you to read the book called “Ruling of World: Jews”, in which he describes the plans of the Jews to destroy nations. Because today's issues cannot be resolved without understanding “Jewish Nazism-Political Zionism”.

Our world today is a Jewish prison under the domination of “Jewish Nazism-Political Zionism”, whether openly or secretly. A simple method is sufficient to understand this. Just as XRAY devices can reveal details, the issue of “World Domination of Jew” can be easily revealed by using certain methods. While there is an unlimited amount of freedom in every subject on earth today, these freedoms can never be used to criticize the Jew. Those who use it are destroyed by being discredited.

The Jew has never been an international type. They are apparently patriotic businesspeople with work ethic, who use the languages of the countries they live in and get their name and surnames. These are the ones who do not deny their Judaism. Another part is Jewish by their ancestry and has a dark past and no one knows their Judaism. You see them as patriotic nationalist, leftist, liberal, politician, deputy, minister, prime minister, bureaucrat, soldier. Undoubtedly, these cryptos are the most dangerous ones. You can only recognize them by their actions. Since they are supported from outside, their most distinctive feature is that they say “I will not let you get it done”. These cryptos have done the most damage to other countries and our country.

Whether open or crypto, a Jew's loyalty is until it conflicts with his interests. He never, ever gives up his soul. He is always Jewish. Others are Goyim for them. The goal of the Jew is “World Domination”. In the Zion protocols established for this goal, it says, “Confidentiality is the foundation of our strength.” In this respect, no one in Şişli, London, Brooklyn and New York come across a bearded and cloaked Jew. The treacherous structure FETO took its inspiration from these Zion protocols. What did they say about Israel? “Our favorite country in the south”...

Christianity has been poorly separated from its origin. This separation took place step by step and insidiously. There is a struggle against “Jewish Nazism-Political Zionism” in the communiqué of the Jesus Christ (pbuh). However, this struggle was unfortunately abandoned by the Christian clergy. The lethargic clergy, far from social life, surrendered to Judaism. Thus, Judaism was gradually injected into Christianity. Finally, Protestantism was born, and together with Protestantism, Judaism began to penetrate in the churches. Protestant preachers always quoted the Torah and Talmud in their sermons. Thus, Christianity took on a form inspired by Judaism. British Protestants were most affected. There were even those who saw themselves as the lost tenth tribe in the 19th century.

Medieval Christianity, on the other hand, was more intelligent and forward-thinking than modern Christianity. They did not kneel before Jewish power as they do today. Again, they knew that “Jewish Nazism” hated Jesus and Mary. There was hatred against Christianity in the Talmud and the Torah. They knew that there was a threat and danger not only to Christianity, but also to all societies. The King of France, St. Louis II, ordered the Talmud to be collected and burned in 1240. Because in the Talmud, immoral accusations were made against the Virgin Mary...

Historically, all societies have always seen the Jews as a threat and danger. This is because in many empires; It is the fact that they brought the material and spiritual forces under control in the Roman, Spanish and Ottoman and caused their collapse… Napoleon said: “These Jews are like grasshoppers, leafworms and will destroy my France”. Today as a matter of fact, not only France but Europe is under the control of the Jews. Ferdinand and Isabella had kicked them out of Spain…

Until the French Revolution, the Jews could not have an impact on the masses, except to seize the courts. It is a fact that the Torah and Talmud were preaching to them to become rulers of the world. They do not believe in Allah but in World domination preached by Jewish Nazism.

After the French Revolution, thanks to the power of money and finance, they became able to direct the currents of ideas and control the masses thanks to the press and broadcasting. Europe and America were under the influence of “Jewish Nazism-Political Zionism”, first with finance and then with the power of the media.

Unfortunately, the pioneers of all intellectual movements of the 19th century were the Jews. Both money and revolutions were used as a weapon for success. At the head of the international socialist organizations were the Jewish Marx and Lassalle. Both were purely Jewish and they avenged the contempt of their race under the guise of class struggle. Everything was designed for “Jewish World Domination”. Bolshevism would emerge from Capitalism and establish the dominance of the proletariat, but the aim here was not to raise working conditions and living standards, but to “turn the proletariat into Goyim”. But to understand this, it was necessary to experience the 1990s.

While the goal of Jewish Nazism was World Domination, the goal of Political Zionism was to establish Greater Israel. The three main goals for World Domination were the capture of Money and Capital and the media, and the destruction of leaders and intellectuals who defended the freedom and development of countries.

This is exactly what is practiced in our country in the past and today. The obstacle in front of the State of Israel was Abdul Hamid II and the Ottoman Empire. Abdul Hamid II was dethroned, the empire was shattered in a short period of ten years. Then Israel was founded… Today, however; the target is “Greater Israel”. For this, President Erdoğan must be dismissed and this country must be disintegrated.

Christianity has evolved into Jewish Christianity in the progress of time. Those who are ashamed of Christianity or those who think that Christianity is outdated? Eventually, the "Evangelical" sect emerged. Zionist Christians. Later, Christianity became a religion of formality by its followers. The phrase “my kingdom is not of this world” attributed to the Lamb of God was interpreted as trusting on Judaism and fooling and laying around. Taking advantage of this, the Jew accomplished all three of his goals. Two world orders, Bolshevik in the East and Capitalist in the West, were established. The establishment of a third, the Islamic World, was constantly prevented.

At the beginning of the 20th century, Christianity had become a Goyim under the command of Jewish Nazism. The elite and ruling class were under all kinds of control. Intellectuals, on the other hand, could not speak under pressure. When it comes to the World War II, at the beginning of the Capitalist world, there was Jewish Roosevelt, and in the Communist World, there was Stalin, who acted with the ideas of Jewish Marx and Lenin. They both served to make this dream come true. The greatest enemy of that day was Hitler, the archenemy of “Jewish Nazism-Political Zionism”. Hitler was destroyed. Supposedly there was a Capitalist-Communist fight.

While the idea of World Domination proceeded in three directions, money and capital, media and finally leadership were taken over. The view we have seen in the past time is as follows; Communism faithfully served Zionism and was destroyed. The current representative of capitalism is the EU-USA. We see that the representation is shifted towards China. The wealthy status of the EU-USA will not prevent its collapse...

So, what is wanted to be substituted?

Of course, it is “One World State”

Fragmentation in the Middle East is for the security issue around Israel. The fragmentation will continue until this issue is resolved. The goal is the city-states that are divided into tiny pieces...

What we see today is not Rivka Ravitz, the mother of 12 children, the Chief of Staff of the former President of Israel, Reuven Rivlin, Biden with a canister head who kneels in front of leaders, it is “Jewish Sovereignty” depersonalized Christian communities. There is a surrendered so-called Christian and Muslim puppet leaders and a disgusting world. Had it been otherwise, Biden with a canister head would have kneel before all mothers of 12 children in Africa and the Middle East with the same respect. Nor would he put pressure on poor or developing Asian and African countries to control population growth. Especially they would not slaughter innocent women and children in the lands they occupied.

If FETO had succeeded on July 15, this nation, which had served The World Islam for 1,200 years, would have been brought to its knees in front of this power, which is considered “Authority”. A small group of people who believed only in Allah, not the power, made history against this power that night when they got down on their knees.

Of course, in one day. Then, the Jews will hide behind rocks and trees, and the rocks and trees will cry out: “O Moslem, there is a Jew hiding behind me, come and kill him.”

More in this category: « Relationship Between February 28, 1997 and July 15, 2016 Amnesty for the Coup Plotters of February 28, Never! »
Login to post comments
back to top