Straits are the Legacy from our Ancestors 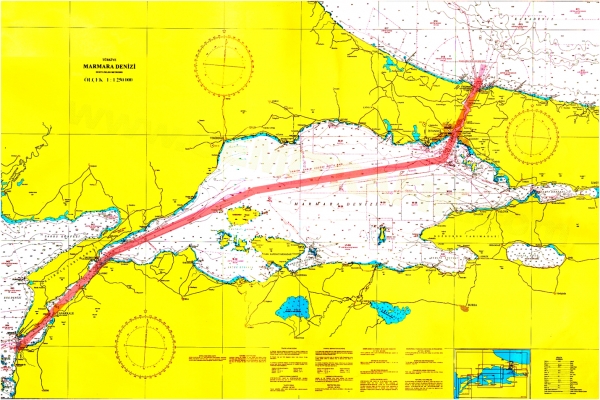 Our ancestors tried to control the strait passages by building various fortresses in the Istanbul and Dardanelles Straits. While Bayezid I was building the Anatolian Castle and Mehmed the Conqueror was building the Rumelian Castle, they were trying to protect these lands.

Because the Straits are the most important geographic region on the crossing route of Asia and Europe. It is not possible to rule over Anatolia without controlling the Straits. For this reason, it is a debt for us to protect this important legacy from our ancestors.

600 years ago, our ancestors had a say in the Balkans and the Middle East, thanks to these fortresses and the Straits. However, for almost a hundred years, the Sabbateans and Zionists, who have wanted to tear us away from this country, have done all kinds of dirty work in order to take the Straits from us.

Unfortunately, this minority crowd dominating the media more than our people who have common sense. For example, we can see people who oppose a project like Kanal Istanbul, which is important for our country in every respect. However, in this way, the sovereign rights of our country will be strengthened. To see and understand the issue as simply "taking a toll from the straits" is nothing but lack of foresight.

The discourses of the media and university barons are very strong, but the answers of people like me who have been involved in the maritime profession for long years are unfortunately not effective enough. They still continue to oppose this great but too late project with their ridiculous criticism.

In this case, we sailors who earn their money from the maritime have an obligation to inform the public by writing more articles about Kanal Istanbul. Because it is necessary to silence these people who see maritime as "drinking raki in the Istanbul Strait" and who speak with infidel words.

In addition, it should not be forgotten the previous governments' work on the Straits and their efforts to control the transits. In this article, only the actions carried out until after Montreux will be explained. In our next article, we will try to explain the Straits Regulation, Istanbul Strait crossings operation line studies and the latest situation we have reached. Hopefully, sane people, instead of serving our enemies, will undertake these and similar works that will further strengthen the sovereign rights of our country.

Finally, at the initiative of Turkey, a meeting was held in Montreux to amend the provisions of the Treaty of Lausanne on The Straits. The reasons put forward by Turkey were considered appropriate by all states before the upcoming World War. Accordingly, the right of ships to free transit through the straits at no cost was protected, but the demilitarized zone was abolished and many articles were amended in favor of Turkey.

According to Montreux, in the event of war and close war, Turkey would be able to fortify the straits in accordance with its own defenses and close them to hostile countries. The transit of warships larger than a certain number and tonnage through the Straits was restricted.

Thanks to the great support of the Soviet Union, we had the opportunity to tear away some of the provisions of Sèvres and Lausanne in 1936. However, we could not get a fee for the transits and we could not prevent other countries from moving freely. This inconvenient situation in terms of sovereignty was largely overcome by the "Straits Regulation" that we developed years later. It is our obligation to commemorate our contributing statesmen with gratitude and appreciation.

World War II was approaching, and thanks to Montreux, both Turkey and Soviet Russia secured their ports comparatively. As a matter of fact, thanks to this treaty during the war, the security of the Black Sea ports, including our country, was ensured.

But it could not adequately meet Turkey's sovereign rights. However, after 60 years, our security rights, which we could not achieve with the Montreux Agreement, were finally achieved considerably.

However, these studies were obtained over a long period of time and with a lot of effort in accordance with international law. We succeeded in changing Montreux just like in Sevres and Lausanne. Some of the articles signed against us were corrected for security reasons.

We should also look at the efforts made for Kanal Istanbul in the same perspective. It is unbecoming for people who love their homeland to oppose national projects just to annoy the government or to oust Erdogan. We are obliged to act in a way that protects the interests of the country.

In my next article, I will mention the efforts of our state, from the Straits regulation, which we imposed by force, especially in Russia. It is hoped that the efforts to strengthen our sovereignty over the straits will not be used by small political fights. That’s it…

More in this category: « Declaration of the Fifth International ASSAM Islamic Union Congress Consolidation of Our Sovereignty Rights in Canal Istanbul and the Straits »
Login to post comments
back to top