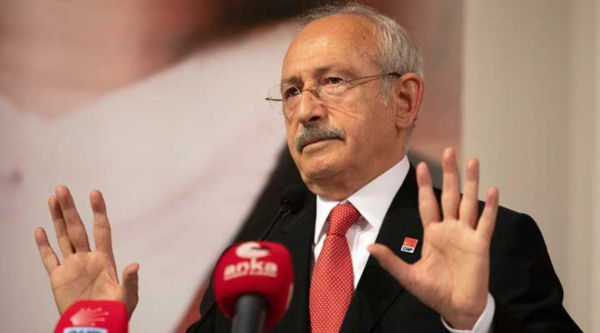 One of the important figures of the Second World War was the Propaganda Minister Joseph Goebbells, who was Hitler's right-hand man. Goebbels is one of the few people in the history of the world who used black propaganda in the best way and trailed the masses after him. Goebbels' task was to justify the inhuman practices of the Nazis to the world. He is famous for his book "Big Lies", which contains his most striking speeches. It contains the false propaganda techniques that brought the Nazis to power. It is written on the cover of the book “the future will either be ours, or there will be no future.”

Some of Goebbels' black propaganda techniques are as follows: “Lie during the propaganda, there will be believers. If you have failed, keep on doing. The larger the lies used in propaganda, the easier it is for people to believe them, the greater the effect of lies. The public mind should always be kept warm, not allowed to cool down and return to the normal course of business. The time of propaganda should be chosen carefully, it should be placed in the minds at the most appropriate time and efforts should be made to keep it there.”

When looked carefully, it will be seen that the techniques of Goebbels were used in the lie and slander campaign carried out by the Republican People's Party and its supporters about our President and the People's Alliance. The aim is to deceive the masses with lies and weaken the power, to hand the country over to the globalists.

The latest lie of Republican People's Party was the following news, which appeared hours before the YKS (Higher Education Institutions Exam) exam on the T24 website a few days ago. In the news, it was stated that "The protocol has been approved, Qatari youth will be able to study medicine in Turkey without any exam". Goebbels Kemal, without researching this news in detail, immediately believed it and tweeted the following tweets. 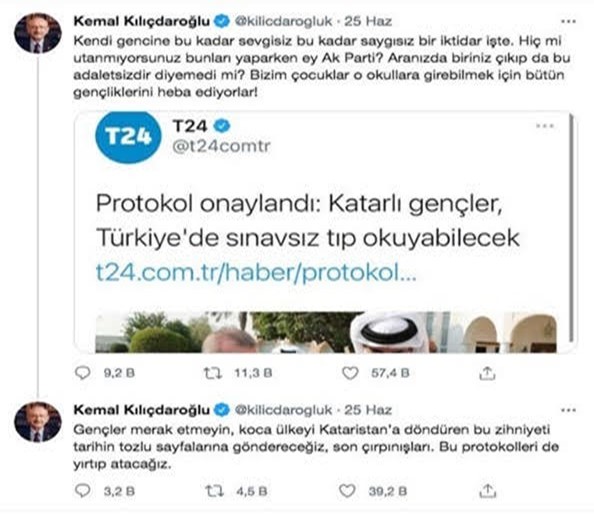 Even though the authorities tried to explain that this was not the truth, people who were in line with the "Lie Poisons" logic were already poisoned. However, the protocol signed between Qatar and Turkey on March 2, 2021 only covered military personnel and students between the two countries. The situation was different for other faculties. According to Council of Higher Education legislation, foreign students had to take an exam in order to get education in Turkey.

After the explanations of the authorities, the T24 website pretended to retract from the mistake and apologized. But Kılıçdaroğlu did not deleted his tweet...

Let us make this determination first.

The training of military personnel of friendly and brotherly countries under the roof of the National Defense University means Geoculture and Geomilitary, which are sub-elements of Turkish Geopolitics. This means that Turkey has returned to the basin of civilization. A new world is being established, the center of which is Turkey. A geomilitary union is formed under the leadership of Turkey. But fools cannot understand this.

These trainings are very important from a geomilitary point of view. The fact that the soldiers of friendly and brotherly countries have personnel familiar with the tactics and technique of the TAF, as well as war technology and strategies will enable joint military operations to be carried out together.

Such agreements have been made not only today but also in the past. Libya did not have its own Military Academy until the 1970s. Their officers studied in Turkey. It is a fact that Gaddafi and Haftar graduated from the Turkish Military Academy, which I am always honored to be a member of. Friendly state officers had graduated with us.

Since the 90s, the officers of the Central Asian Turkic Republics, Balkan countries, Pakistan and many African countries have served their countries with the training they got from our military schools. Former Prime Minister of Pakistan Pervez Musharraf is a graduate of the Turkish War Academies. He speaks Turkish as his native language.

Today, we train the military students of not only Qatar, but also Niger, Sudan, Azerbaijan, Bosnia and Herzegovina, North Macedonia, Kosovo and Albania. Nearly a thousand foreign military students get education under the roof of National Defense University.

Now, Qatar, which sees same its fate with ours, wants its officers to study in our military schools. They will learn the tactics and technique of the TAF and its military strategy. In addition, our countries' joint operational capability will increase. This means that the Emirate of Qatar has taken its place in the new world where Turkey is the central country.

As a matter of fact, until July 15, Turkish officers were trained in American military schools as required by NATO, while at the same time they were the insurance of American sovereignty in Turkey. When they staged a coup, it was said that “our boys succeeded”. September 12, February 28, April 27 e-memorandum, July 15 and other initiatives took place in this way.

It is no coincidence that all the staff officers who participated in the July 15 coup attempt went to the “Naval Postgraduate School” in the USA. Thankfully those days are gone and Turkish officers are no longer trained by American military institutions.

It provides training to other countries within the framework of its own geopolitical principles.

There are two institutions that are uncomfortable with this situation. One is the US shadow CIA "RAND Corporation" and the other is Republican People's Party. In the Turkey report of RAND Corporation; It is underlined that the re-establishment of military-to-military relations in Turkey through a US-friendly political opposition party and NATO-biased commanders is vital for the future of relations with Ankara.

Four scenarios regarding the future of our country are put forward in this report.

In summary, the RAND report states that the New Turkey is 'unacceptable', and especially that the Turkish Army should not move away from being the guarantor of American interests.

I believe that the children of our noble nation will not give credit to the lies of the USA and its local collaborator Goebbels Kemal.

In the 10th verse of the Surah Adh-Dhariyat: “Condemned are the liars”
What we can do is only to say Amen.

More in this category: « To Put the World in Order is White Man’s Burden July 15 Coup Attempt and the Victory of the Nation »
Login to post comments
back to top