In Islam, The Form of Government Transcends Democracy 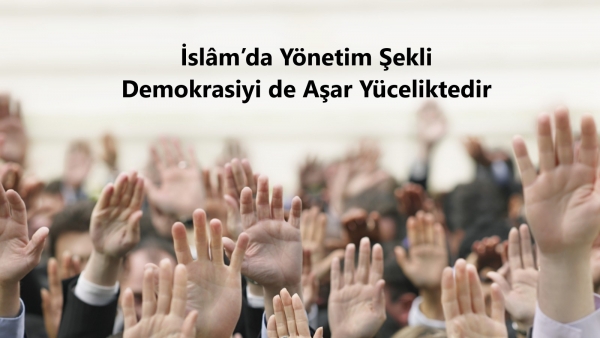 Islamic Government: It is a magnificent system in which believing, virtuous and competent people who will come to rule by way of elections will rule for a period of time to be determined in the light of revelation, common wisdom and scientific data, and its framework that encompasses the future.

For centuries, our traditional scholars and the ulama of our century who imitated them kept reporting a mistake. The discourse is:

Islam did not abolish the slavery and concubinage system, but aimed to abolish it gradually, and introduced rules to prevent formation and eliminate the existence.

While continuing this mistake, the world has passed from the traditional slavery-concubinage order to the modern slavery-concubinage, but our fiqh has not been able to finalize the gradualism for 14 centuries. Our source works are still full of slaves and naked concubines, whose private parts are regarded as private parts of men. In other words, it has been deemed permissible to sell even young Muslim concubines, whose breasts are explicit. We have transferred this hump that we carry on our back to Islam.

What was the Truth?

However, this is not true. During the Medina period, the Islamic War Captivity System was created with the Quran and Sunnah, and the slavery-concubinage system was thrown into the garbage of history. We proved this determination that reflects the truth with the verses of the Qur'an in our 300-page study called Concubines and Their Exploited Sexuality in the Light of the Qur'an and Sunnah, which was also translated into Arabic and French. We revealed it in our television programs.

We still haven't received any scientific criticism, although we offered them to our scholars who criticized even the articles written years ago and even undertook to pay royalties. I wish we could have gotten.

Another Misconception About the Islamic Governing Order

A similar misconception about slavery and concubinage is seen in the government system; It is said that there is no specific governing order within the framework of Islam. This discourse is widespread and generally accepted. However, the governing order in Islam is very clear and it maintains its glory and uniqueness in our time.

While examining democracy in terms of Islam under four headings in our article titled "Does Islam Affirm Democracy?", we actually revealed the governing order of Islam with the explanations we made.

Let's go through the kingdoms and sultanates of the historical periods. Let's go over the kingdoms inhabited in Europe, on which we are trying to be located, and let's look at the practices in democracies developed under the shadow of the kingdoms and in our country.

The summary of the application is this: The party, which wins the majority of the deputies in the parliaments formed by the election system, undertakes the government, and governs the country for a certain period through the council of ministers that received a vote of confidence. This is the essence of the system called democratic government and emphasizing excellence. Although there are differences, this is the essence of the system we call Presidency.

This system is handicapped because this system is actually a system that is organized and directed by mercenaries who can use the media and dominate the government through the people. The governments will also be formed according to the laws to be prepared, moreover, it will benefit the segments represented by the governing forces rather than the benefit of the whole people. This is the actual matter of fact. But even if we accept that the people are conscious and will make conscious choices, it is inevitable that an order will be formed in which the governing forces that make up the majority will rule.

Let's take a look to the Islamic Government Order. We can present the four characteristics that explain our view of democracy, which we mentioned in our article titled "Does Islam Affirm Democracy?", as the qualities of the Islamic Rule of Government. For this reason, we strongly recommend you to read our more detailed article.

Now we can look at these four characteristics again by summarizing.

Allah has not given any privileges to any person, family, race or tribe in terms of government. Our Prophet did not give any privilege to any person or group, including his own family, and did not make a will for the future. To summarize, the election of the governors is based on belief, righteous deeds and merit by means of justice and shura method.

It is clear that in the age of communication and transportation we live in, the Shura system cannot be carried out by any method other than the election system in which the people will participate.

At Tawba 71 and Nisa 58, it expresses the characteristics that should be possessed. (For the explanation of these verses, you should definitely check our article linked above.)

As in Western democracies, for example, materialist, adulterer, moneylender and homosexual types cannot come to power in Islamic Order.

Let's examine in detail this feature a little more:

The criteria that will be the basis of the government are the rules set by our Almighty Lord with the Quran and exemplified by our Prophet. The judicious and virtuous structure formed by these rules is exemplified in our article, of which link is given.

The rulers are subject to common wisdom and scientific data only in areas where Allah and His Messenger Muhammad do not judge.

Islamic society is free in areas that are not specified in terms of the Quran and Sunnah in Islam. The government can attribute the time to the desired time and conditions.

Now can you tell which system of government is more distinct than the Islamic system. You can also apply the described features to parliamentary, presidential, and other systems.

Some might say: You use some concepts of western democracy in your statements.

We have no problem in formulating concepts that express our own values. There is no harm in using some western concepts in expressing our values and presenting them to the perception of the century. As we will explain later, one of the meaning of the Tajdid / renewal we need is that we can use borrowed concepts.

Islam is the religion imposed for all humanity, created by Allah with the features of thought and production. Therefore, human nature is our resource. We do not have a law that prevents us from benefiting from wisdom, which can be defined as the knowledge and experience of humanity. On the contrary, we have superior measurements that require us to have wisdom wherever we find it.

Islamic Government Order: It is a magnificent system with a definite framework that encompasses the future in which believing, virtuous and competent people who will come to rule by election will rule for a period to be determined in the light of revelation, common wisdom and scientific data.