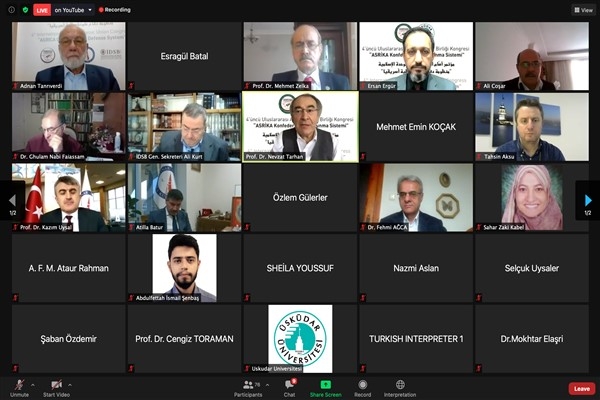 Organized by ASSAM, Üsküdar University, ASDER, UNIW and Kütahya Dumlupınar University, the 4th International ASSAM (Justice Defenders Strategic Studies Center) Islamic Union Congress was held under the title of “ASRICA Confederation Defense System”. The congress was held online this year as part of pandemic measures. At the congress; Scientists from countries such as the USA, Iraq, Egypt, Niger, Qatar and Malaysia made 27 declarations.

Prof. Dr. Nevzat Tarhan: "There are lessons we can learn from the pandemic"

Üsküdar University Founding Rector, Psychiatrist Prof. Dr. Nevzat Tarhan, in the opening speech of the congress, especially touched on the effects of the pandemic process and gave messages about what messages can be drawn from the pandemic in the Islamic world. Prof. Dr. Nevzat Tarhan said, “As you know, Allah Almighty speaks to people constantly… Allah talks in the language of the event. We already know that this pandemic is not accidental. If we can understand these events correctly, we will learn the right lessons, correct our mistakes, and continue on our way. The pandemic have formed a sense of fear in people. There is no physical and psychological comfort, people's freedom is restricted. Now everyone cannot hug their children, cannot touch his hand, his mouth, his face. There is no fast way of living like before. Modern people who are in pursuit of pleasure have lost all of this. On the one hand, the Islamic world is now sad about the Kaaba. Al-Masjid an-Nabawi, Al-Aqsa Mosque and Süleymaniye Mosque are sad. People are not able to visit there. Hagia Sophia was opened, it is a great service, but it is the same. We cannot go there as we wish. People got lonely"

Stating that the total cost of wars, conflicts, terrorist incidents and acts of violence to the global economy was calculated as 14.1 trillion dollars in 2018, Prof. Dr. Mehmet Zelka drew attention to the fact that defense expenditures in Middle Eastern countries alone have been close to 12 trillion dollars in the last 20 years. Stating that Islamic countries should form a union, Prof. Dr. Mehmet Zelka said, "Islamic countries form a union and go into a joint defense and security structure within this union, the formation of the Ministry of Defense, the establishment of defense presidencies in the countries, the establishment of the necessary institutional structure within this structure from a center to be determined, By holding regular and periodic meetings, it is only possible to reduce tension, disagreements and foreign interventions by determining and implementing common defense and security policies, and thereby increasing security and establishing an atmosphere of peace”.

Adnan Tanrıverdi: "It is aimed to present a model with ASSAM Congresses"

ASSAM President of Board of Directors Adnan Tanrıverdi shared information about the congress, which was held for the fourth time this year, in his opening speech. Touching on three congresses held in the past years, Tanrıverdi stated that the congress is a community initiative and said, “Our aim is to present a model for decision-makers. The purpose of this congress is to determine the procedures and principles of the common defense system to be established in the 9 federal regions affiliated to the Confederation and the national states affiliated to these federal regions with the common defense system to be carried out in the Confederation Center. Islamic countries, 61 of the 193 states that are members of the United Nations organization are Muslim countries. 1.85 billion of the 7 billion 632 million world population consists of the people of the Muslim state countries. 30.9 million square kilometers of the land of the world, which is the total 150 million square kilometers, are the lands of Islamic countries. ASSAM tries to put forward a term opposite to Eurasia by saying "Asrica continents" representing Asia and Africa, the backbone of the Islamic geography. In other words, we are trying to determine Asia and Africa unity”.

Adnan Tanrıverdi: "ASRICA is a candidate to be the superpower of the future"

Drawing attention to the richness of the resources of the Islamic geography, Adnan Tanrıverdi said, “The Islamic geography has 55.5 percent of the world's oil reserves, 65 percent of its production, 64.1 percent of natural gas reserves, 40 percent of its production, it has a potential power, which is candidate to be the superpower of the future in the Eurasian geography, by combining its opportunities, efforts and goals with its geopolitical position is the historical accumulation of common civilization values.  However, the Islamic world is the most intervened countries in this land and the countries that occupy the agenda of United Nations the most. These are the countries where terrorism and anarchy are not lacking in their territory, whose resources are managed by foreign powers, where human rights and freedoms are violated, where income distribution is corrupt, where political, social and economic instability prevails, and who demand and need the help and support of external power centers to solve their internal problems”.

Adnan Tanrıverdi stated that the purpose of the congresses, which was held in a series, was to ensure that the institutions required for the gathering of Islamic countries under a will and to reveal the legislation that these institutions should have as a model. We carried out the main subject of the first international ASSAM congresses in 2017 as the determination of the government bodies and legislation for the Islamic Union, the second one in 2018, the determination of the economic cooperation principles and procedures for the union from Istanbul, and the third is defense industry cooperation principles and procedures in 2019.

Adnan Tanrıverdi: "An ideal model will be revealed for the Confederation of ASRICA Islamic Countries"

Speaking at the opening session moderated by ASSAM Vice Chairman Ersan Ergür, Kütahya Dumlupınar University Rector Prof. Dr. Kazım Uysal thanked the organizers and participants of the congress, pointing out the importance of unity and solidarity in the Islamic world. Secretary General of the Union of Non-Governmental Organizations of the Islamic World Atty. Ali Kurt stated that all Muslims in the world should be in unity and solidarity in the face of injustice and that it is a necessity for them to cooperate. Azerbaijani Ruling Party MP, President Energy Policy Advisor Prof. Dr. Elman Nesirov also thanked Turkey for their great support in the fight of Azerbaijan, especially in the rescue of Karabakh...

More in this category: « Who Rules The Seas, Rules The World 4th International ASSAM Islamic Union Congress Held »
Login to post comments
back to top