Concepts of Liberation, Independence and Sovereignty 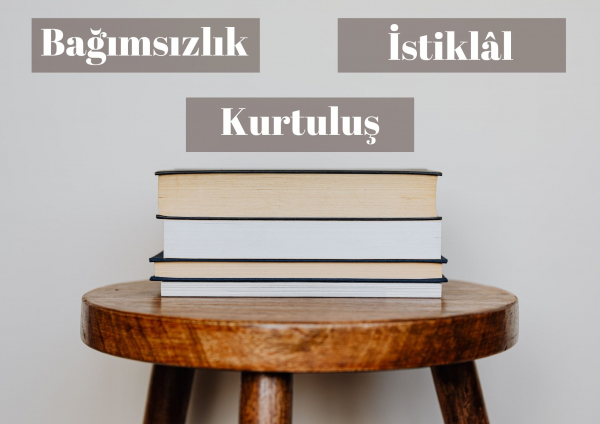 The Greco-Turkish War has been called the “Liberation” or “Independence” war for years. I have written many times about this issue and expressed how wrong and objectionable it is, and instead I have stated that it is appropriate to call it “National Struggle”.

There have been some good developments in this regard. For example, the concept of “National Struggle” began to be used more frequently instead of the “War of Independence”, which has been used for 90 years. Because it was an ugly expression for Turks trying to get rid of a small state like Greece.

Despite this positive development, some of the statesmen still continue to use the term “War of Liberation”. This way of expression is also so wrong. Because the meaning of the word “liberation” is most used in the sense of “sovereignty”. Using this name for the Greek War is an erroneous equivalent to the concept of the “War of Independence”.

So, let us try to explain why these concepts are used again and try to dwell on what they actually mean…

Especially people who have lost their brains due to drinking too much raki should know that the Turkish nation has never been a prisoner in any period of history. Especially after Turkey became a Muslim, it was the banner bearer of Islam in the lands it ruled. In the Crusader and Mongol invasions, it managed to remain independent by inflicting heavy damages on the anti-Islamic armies.

The following words in our National Anthem express our true situation and how we have always remained independent: I have been free since the beginning and forever shall be so. / What madman shall put me in chains! I defy the very idea! / I'm like the roaring flood; trampling my banks and overcoming my body, I'll tear apart mountains, exceed the Expanses and still gush out!”

In almost all our provinces, “independence day” is organized and ceremonies humiliating the Turkish nation are held. In particular, some flattering and sycophantic people deliberately make fun of this brave and heroic Turkish nation by using the words liberation, independence and sovereignty.

Armenians, Greeks and Jews may ask for independence day because they have been freed from the Muslim-dominated Ottoman Empire and sultans. However, these words and expressions implying that we get rid of the Seljuk and Ottoman dynasties, which made Anatolia a homeland for the Turks, are very wrong.

It does not suit any sane Turkish citizen to use the word “liberation/independence/sovereignty” against the heroic Turkish Nation to flatter small communities that have been living under our protection for 500 years.

Some may say, “We did not wage our War of Independence only against the Greeks, we also fought the British, the French, and the Armenians.” Under the leadership of Sütçü İmam and Arslan Bey, we fought heroically with the French in the cities of Maraş, Urfa and Antep and expelled these enemies of headscarf from our lands. Under the command of Kazim Karabekir and Halid Pasha, we defeated the Armenians who committed the massacre. We showed this fierce enemy of Islam that they could not stay in this country by fighting against the British soldiers, albeit small, with Ethem Dipsheu and some Kuva-yi Milliye soldiers.

Despite all these invasion attempts, these states, which we allowed to enter our own lands in accordance with the Armistice of Mudros, could not completely occupy our country. In the locations they occupied, they were able to resist for a very short time and eventually withdrew in disgrace. In addition, occupying some cities of Western Anatolia with a few battalions of soldiers does not mean that we have lost our sovereignty. It is very wrong to say that we waged a “War of Independence” against them or “We won our independence”.

If we were a country like the United States, which gained independence from the British, it would not be a problem to call it the “War of Independence”. As a matter of fact, the American colonies, which consisted of Irish, German, British and French slaves, gained their independence as a result of declaring their independence by taking advantage of the wars (Seven Years' War) between England, Austria, France and Russia between 1756-1763.

As a matter of fact, at the beginning of the war, George Washington published the United Nations Declaration of Independence (July 4, 1776), written by Thomas Jefferson and expressing their desire for freedom. The 4th of July was later recognized as the Independence Day of the USA.

After six years of war, England, which was defeated by the colonial forces under the command of George Washington, withdrew and accepted the independence of 13 colonies with the Treaty of Paris in 1783. The colonies that declared their independence established the United States of America (1787), which consisted of free states in internal affairs. With the completion and ratification of the Constitution in 1789, a new nation and American supremacist identity was born. Here, the expression of “War of Liberation/Independence” best suits Americans. But it is not and cannot be valid for Turks who say “I have been free since the beginning and forever shall be so”.

So, why do they persistently use the phrase “War of Liberation/Independence” or the concept of “sovereignty”? The most appropriate answer to this would be:

Some non-Muslim minorities, who took advantage of the elimination of the commanders who defeated the Greek, Armenian and French soldiers, through various courts and executions, pretended to be Turkish and wanted to oppress and even destroy Muslims if it was possible. In order to do this, they considered the abolition of the "Caliphate" institution together with the help of England as one of their most important goals.

First of all, a savior was needed for this purpose. This savior was asked to be removed from all relations and symbols of the religion of Islam, especially the institution of the caliphate. That's why this is the simplest explanation for persistently using “liberation/independence/sovereignty”.

Although the expression “redeeming the caliph from captivity” was used in the first article when the Assembly and regular armies were being established, the real attitude emerged as soon as the opportunity was seized.

Do not believe those who have persecuted for years by saying “I saved these lands” even though they are Greek, Jewish and Armenian toadies. They erased the traces of non-Muslims in the past by using the surname law and tried to deceive us by using fake Turkish names. Those who spoke the truth were brutally hanged and eliminated.

Turks have never lived in captivity in any period of history. We have always captured the enemy. These are insulting words, attitudes and behaviors such as the “liberation/independence” war or sovereignty. Even in the Great Crusader and Mongolian attacks, we were not captured. On the contrary, we cleared all the Anatolian lands as an example for the enslaved Muslim communities with our conqueror identity.

Just as people like Kilij Arslan sent the Crusaders to hell, Baibars destroyed the Mongol infidels in Ain Jalut. These enemies of Islam never dared to harass Muslims again.

In recent years, the battling stories of brave Turkish commanders such as the Seljuk Sultan Alp Arslan, Jalal al-Din Mangburni, Ertugrul Gazi, Osman I and Oruç Reis have been produced in series of movies. There are diligent people who try to show that the Turks cannot be subjugated as a movie with different scenarios. These movies they have produced have proven to the whole world the fondness of freedom that comes from the depths of history of Turks with admiration all over the world.

So, we must put an end to the insults against our heroic ancestors in order not to allow the non-Muslim minorities and the enemies of Islam to humiliate the Turks even more. Otherwise, we will fall into the trap of bad people who try to tear us away from our glorious past by belittling the Turks with concepts such as liberation, independence and sovereignty. That’s it…

More in this category: « Muslims are One Nation Consultation with Yemeni NGOs Which are Experiencing One of the Greatest Humanitarian Crises in History »
Login to post comments
back to top