Ethem Dipsheu the Hero of Turkish War of Independence 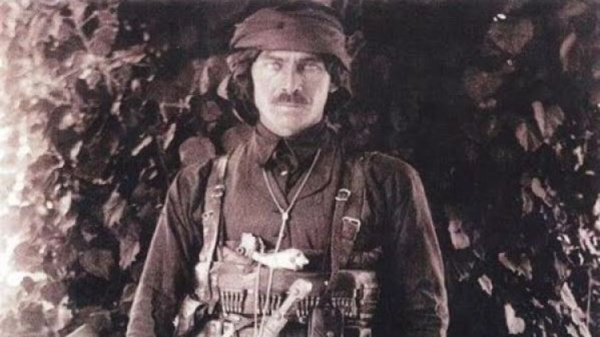 There are countless heroes of the Turkish War of Independence. But we are unaware of most of them as the whole nation. The most important reason for this is the falsification of recent history. The facts are turned upside down, heroes are declared traitors, fake heroes, namely the Sabbateans, are declared heroes. Here is one of our real heroes, Ethem Dipsheu. Ethem Dipsheu, whose two brothers were martyred in the Ottoman army and the other two brothers were members of the Special Organization, is the youngest son of a family that settled in Bandırma after the Circassian genocide.

Ethem Dipsheu, who is interested in military service as in all Caucasian peoples, secretly escaped the house because his father did not allow him and enrolled in Bakırköy Junior Officer School (Bakırköy Küçük Zabit Mektebi). He was promoted to officer in the army, where he joined as an non-commissioned officer. He showed great heroism by fighting on the front lines of Russia, Iraq, Iran and Afghanistan.

During the years of the Turkish War of Independence, he fought against Greek gangs and bandit groups who oppressed the people in the Aegean and Marmara regions with his gang, which he formed with his own means. He brought together the important armed and powerful people of the region such as Yörük Ali Efe, Dramalı Rıza, Demirci Mehmet Efe, Parti Pehlivan Ağa and Gavur Ali, he formed Kuva-yi Milliye unit numbering 5 thousand.

These units, commanded by Ethem Dipsheu, achieved significant success during the years of the Turkish War of Independence. These units are among the most effective defense measures against the occupying forces before the Parliament was opened and regular armies were formed.

By stopping the Greek march on the Menderes River, he achieved great success in eliminating the feeling of despair and pessimism caused by the great defeat in the Palestine Front in the World War I.

It is interesting that the commanders who were responsible for the great defeat we experienced in the Palestine Front were later became heroes; Ethem Dipsheu has been declared a "traitor!" by these fake heroes.

However, during the Greek occupation, one of the things to be done was to maintain order and security in the areas that were not occupied. While heavy casualties were inflicted on the Greek forces on the one hand, it was a very difficult task to maintain peace and order in Anatolia in order to ensure national unity and solidarity on the other. However, despite all these difficult conditions, the necessary signal to fight against the occupying forces was given by Ethem Dipsheu.

Ethem Dipsheu, who succeeded in making one of the greatest contributions to the honorable struggle of our nation by winning dozens of conflicts and encroachments against the Greek Army, will face much more difficult tasks this time.

Riots had begun in many parts of Anatolia against the Parliamentary Government which was established in Ankara. Against these riots, the Parliament did not even have a proper force to put against them. Kazım Karabekir and Halid Pasha were fighting against the Armenians in the East with some undischarged units. In the south, the people of Maraş, Urfa and Antep; they were inflicting heavy damages to French forces through heroes like Ethem Dipsheu.

Upon the request for help from Ethem Dipsheu, these heroic soldiers had to pause the attacks of Greeks. He succeeded in suppressing the First and Second Revolts of Anzavur and the rebellions that took place in Bolu, Düzce and Gerede.

Ethem Dipsheu, who succeeded in defeating the Kuva-yi Inzibatiye forces that later marched on the Parliamentary Government in Ankara; He chased these rebels to the gates of Istanbul, preventing a new rebellion in this area.

He held meetings with many commanders due to the neglect and failures shown during the Turkish War of Independence in Ziraat Mektebi, which was used as the General Staff headquarters. In the meeting, he scolded the commanders just like they are little children because of the inadequacy of the measures taken and the mistakes made. Because of these harsh words, it paved the way for these commanders to betray him at the most difficult time of the war.

When he returned to the Greek war again, this time the "Yozgat Revolt" began, which spread from Kaman to Tokat. Ethem Dipsheu, who fought very difficult battles with the cavalry forces in the east and the west, desperately took his most elite soldiers with him and set out to suppress this revolt.

The Yozgat Revolt is suppressed after bloody battles. But there have been many casualties. He asks the Parliamentary Government to send Governor Yahya Galip Kargı, who he believes is negligent in this revolt, to Yozgat for trial.

The government dismisses the governor, but takes all kinds of measures in order not to send him to Yozgat. Thereupon, Ethem Dipsheu sent a telegram:

He warned the Parliamentary Government by saying,"the new order you are trying to establish with the claim of building on truth and justice has already suffered greatly by favoritism and nepotism."

Unfortunately, these well-intentioned attempts have been resulted in the opposite way. Meanwhile, Ethem Dipsheu's increasing success has led to increasing jealousy among his political rivals. A similar plot and treachery against Osman Nuri Pasha in the Russo-Turkish War between 1877-1878 was applied against Ethem Dipsheu that time. Pasha, who killed tens of thousands of Russian soldiers, could not get any supply support. Sabbateans also took the leading role.

Because of his reckless and brave character, Ethem Dipsheu and his close brothers in arms begin to be discredited by the jealous commanders. Under the pretext of establishing a regular army, his brothers are used to in order to break his power in the armed forces.

For example, some military units were disarmed. The printing house of the newspaper that he published in Eskişehir was confiscated. The Green Army Society (Yeşil Ordu Cemiyeti), which he was a member of, which fought against the Greek occupying forces, was closed.

He suffered from a serious illness while the plots behind Ethem Dipsheu continued. So much so that he could not even remain standing. Despite this, he still had to come to Ankara.

Ethem Dipsheu, who was barely standing, was asked to go to Bilecik to attend meetings with the representatives of the Istanbul Government. When insisted very much on this issue, he has to be put on the train on a stretcher.

When the train stopped in Eskişehir, he received an intelligence that he would be assassinated by Topal Osman and his men in Bilecik. For this reason, he did not continue on his way and went to his headquarters in Kütahya with some of his soldiers.

However, the Parliamentary Government considered this attitude as “disobedience”. While the Greek march was continuing, an army was sent against Ethem Dipsheu.

After seeing this attitude, Ethem Dipsheu sent a telegram to the Parliament:

He sends a telegram “while the nation was fighting a war of independence while sacrificing much in poverty and misery, what did you do other than increasing your salaries?” The Speaker of the Parliament, who read the telegram from the podium:

Thereupon, Ethem Dipsheu, who declared that he had discharged his troops, informed his soldiers that they were free to do whatever they wanted, and then he settled in Manyas region. His goal was to go to Europe to have his illness treated.

But about a month later, he was tracked down and surrounded by Greek soldiers. As a result of his negotiations with the Greeks, he said that he would surrender in exchange for opening a passageway to go to Europe.

The Greek Commanders, who thought that they had eliminated a great danger, immediately accepted this offer. Ethem Dipsheu, who surrendered while he was sick, went to Vienna via Athens after being held in Izmir for a short time. After being treated here, he went to Jordan.

The Kuva-yi Milliye troops, of which foundation was laid by Ethem Dipsheu, eventually won the Greco-Turkish War. However, this heroic soldier was declared as a traitor and was not even allowed to return home. Ethem Dipsheu, who was included in the group called 150 personae non gratae of Turkey; despite the amnesty issued in 1938, he did not return to the country. When asked why, he claimed that “the right to a fair trial is not given”. He also did not return, saying he would never accept a case of forgiveness.

We still call this hero soldier, who lived alone in a one-room adobe building until 1948, when he passed away, as a “traitor!”. Just as Halid Pasha is called "Deli Halid (means Halid the Mad)" in the textbooks, Ethem Dipsheu is tried to be trampled on by calling him "Ethem the Circassian". Murder will out. These articles will prevent the younger generations from being deceived in the future.

More in this category: « Palestine Must Also Have An Army How the Attacks on ASSAM and SADAT Started »
Login to post comments
back to top