Muslims are One Nation 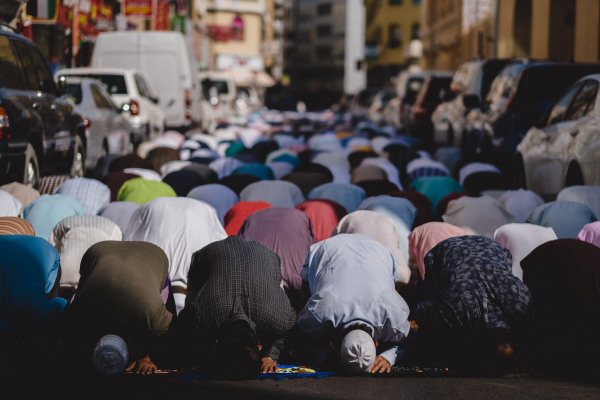 At a time when Islamic societies have long since lost their character of being an “ummah” and are divided into tiny units in the form of a “nation-state” and even a “tribe-state”, there is no doubt that “the rebuilding and revival of the Muslim ummah stand before us as an inevitable task”. [i] The priority in achieving the goal of reviving or establishing the ummah is for Muslims to “gain ummah consciousness” and to break the narrow molds of nation-identities based on an “ethnic, geographical or linguistic” basis. [ii]

Although we tend to define Islam as a religion, it is likely that the Prophet defined it more as a “nation” and “Islam was conceptualized as a nation”. [iii]

Islam is a life order in social life, not only as faith and worship but also as a means of identity.

Everyone who is aware of the most primitive principles of the religion of Islam confirms that “Islam has no borders regarding any race, nation, color or country”. [iv]

The current disease of Muslims is that they adopt a Muslim as they wish and diverge into discord. The cure is to turn towards Islam and to achieve the unity of Islam, as Allah wishes. The unity of Islam and the resurrection of Islam will provide great benefits not only for Muslims but also for all humanity. [v]

European states first demanded reforms from the Ottoman Empire, which they could not do in their own countries and colonies. They encouraged the Ottoman Empire to move away from the absolute will and bring the constitutional administration”. After the proclamation of the Second Constitutional Era, they encouraged unrest in many Ottoman lands; They wanted the equality of non-Muslims, when they made this arrangement, separatist attempts among non-Muslim Christian units increased even more. Although the Ottomans showed special attention to the Hejaz region and the Arabs, Hussein bin Ali was brought against them with the claim of the caliphate. [vii]

The Arab Revolt, which emerged with the support of England, which was deeply disturbed by the Ottoman Empire's participation in the war on the side of Germany, and with the demand for the caliphate, is the most important issue of this period. [ix]

The authors, who took a stand in favor of the Ottoman caliphate, explicitly or implicitly opposed this movement, and in connection with Hussein bin Ali and the Moroccan Sultan, they argued that “the caliph should be from the Quraysh lineage”. In order to make the Ottoman caliphate illegitimate from its beginning, Western authors brought up the issue of both takeover of the caliphate by Selim I and that the Ottoman sultans were not from Quraysh. [x]

They tried to take the Muslims under their rule by declaring the thesis that the caliph should belong to the Quraysh tribe, which the British and then the French brought to the agenda, and that therefore the Ottoman caliphate was not the real caliphate, by citing the hadiths. [xi]

It is the biggest mistake to be deceived by the propaganda of the Europeans in this matter, because the Europeans are more hostile to the Ottoman Empire than ever to other Islamic states, as they are the standard-bearers of Islam and penetrate the heart of Europe. [xii]

This is why France and Italy, which have colonies and political interests in North Africa, have been directly involved in the caliphate issues and publish publications in this field to a level that we could not encounter in previous periods.[xiii]

They started with the occupation of Algeria, then Tunisia, Egypt, The Maghreb al-Aqsa, Tripoli, and Benghazi. Then they clearly occupied India. They tore apart African and Iranian lands and others. Finally, they realized the Balkan League and helped it with all their power. They would almost destroy the Ottoman state and capture Istanbul. [xiv]

The conditions of World War I and the Arab Revolt led by Hussein bin Ali broke up the Arab caliphate movement and the unity of Islam. [xv]

These and other elements are nothing more than trying to break the Islamic world from the center of the caliphate, Istanbul, and increase the opportunities for colonization by making such claims, both in belief and de facto among Muslims. [xvi]

Thus, the member states of the League of Nations (United Nations), which was established after World War I, separate the Ottoman state from the predominantly Muslim Albania, all Thrace, Tripolitania, Egypt, Tunisia, Crimea, and the Islamic lands taken by force by Russia. By doing so, they made an effort to distinguish Arabs and Turks as separate nations by emphasizing the principle of "the right of nations to self-determination" in the Islamic world, even though there was no race issue among Muslims. [xvii]

From a political point of view, a caliphate other than the Ottoman caliphate is not possible. Because the only state that is accepted as legitimate by European states and that can fight them is the Ottoman State. The Ottoman Empire is the most prestigious state in the eyes of Muslim countries, has a large population, has international knowledge and experience, and has a long history. [xviii]

The blessing and happiness of any nation increase after it takes the government from the hands of those who ruled before it. [xix]

It is pointed out that 350 million Muslims have faced many disasters and sad events such as colonization, captivity, the usurpation of their rights, and the deprivation of their freedom, but that a period of awakening and resurrection has begun for that day. [xx]

The main foundations of Islamic unity are primarily Muslims' belief in one God, internalizing moral values, and their affirmation of all prophets. The fact that it is obligatory for every Muslim to “become under the flag of Islam in obedience to the caliph of Islam” in accordance with the verse “hold firmly to the rope of Allah and do not be divided” is an indispensable element of the understanding of Islamic unity. [xxi]

Today, Turkey has lost its former power. However, it is still the most important and most respectful Muslim power. In terms of its geographical location, direct relations with the West, advanced civilization, and possession of modern instruments, it is still the country that has the best standing among other Muslim countries as a means to serve the intellectual, moral, social, and material development of Islam. Turkey is the hope of the Islamic World. Moreover, this is one of the main reasons underlying the fact that England, which was afraid of the resurrection of this realm, wanted the caliphate duty to pass to another dynasty rather than Turkey, and when it failed in its campaigns for this purpose, it attempted to destroy the Turkish power.[xxii]

Those who cannot even a little think about the defeat of the Russians are in astonishment today. The defeat of the US and NATO allied forces in Afghanistan has left them confused. Now they are busy with the question of what will happen next, and their cries for help from the creator are heard on the international media.

The claim that the Ottoman past of the caliphate can be brought back to life by Turkey stems from a practical experience rather than a national feeling. The fact that the Sacred Relics are already in Turkey is, of course, important in terms of the existence of a political right. However, what is more important than this is Turkey's capabilities in terms of real politics, along with historical experience. The fact that Turkey has a say in the activation of the caliphate is not due to our nationalist feelings, but because the current conditions and historical background necessitate this.

After facing new opportunities and risks with the end of the Cold War, Turkey made serious strides in establishing an independent foreign policy in the post-2000 period. In particular, the close relations developed with the Ottoman hinterland can be expressed as a period of restoration in terms of Turkey's relations with the Islamic world.

After the collapse of the Ottoman Empire, the proclamation of the Republic and the subsequent abolition of the caliphate in 1924, in fact, the taking of the political power and authorities in the hands of the newly established Republic of Turkey also put an end to its rule and dominance in the Islamic geography.

Considering the real-political conditions of the period, the possibility that this decision was taken due to an obligation should not be ignored. After the end of World War, I became clear, the care to preserve these Sacred Relics after the proclamation of the Republic is a clue, even if there is no evidence.

Just as the current government opened the Hagia Sophia to worship, it can also declare the Caliphate with political determination. Because, from the point of view of the global uncertainty period that we are going through, this move is also extremely important in terms of determining the fate of Muslims. With this strategic move by our country, the new world order will be formed. This strategic move to be made with the declaration of the caliphate is strong enough to break and remove the attacks and sieges of the west (US and EU).

Considering the current world geopolitics, the only Muslim country which can make this political move is Turkey. The center of the caliphate was Istanbul. The caliphate, which was abolished from Istanbul, should rise again from Istanbul, that is, it should be declared politically.

The strategic move to be announced politically by the Caliphate will have a powerful effect to remove the political, economic, cultural and military occupations and current and possible isolation of the Islamic world and even our country. There is the authority and power to take this decision.

With the establishment of the Islamic Union, the caliph must first be appointed in order to end the bloodshed, tears and occupations in the Islamic world. The Grand National Assembly of Turkey has the authority and responsibility to take this decision. September 03, 2021

More in this category: « Syed Ali Shah Geelani’s Funeral Prayer in Absentia Concepts of Liberation, Independence and Sovereignty »
Login to post comments
back to top