How Proud To Say I Am Minority! 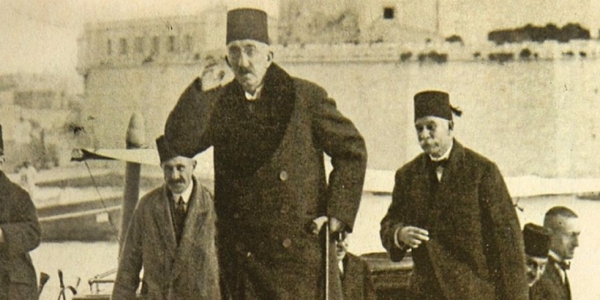 We live in a country where the tail wagging the dog. Not only in the Republic period; In the last 200 years of the Ottoman Empire, we live under the domination of non-Muslim minorities, also called "renegade".

They call themselves "Turks" but oppress real Turks and Muslims. We saw the latest example of this on February 28, 1997. Hundreds of soldiers were kicked out of the army just because his wife wore a headscarf. As if they were not enough, they could not stop and had them to take off their headscarf with the threat of firing tens of thousands of veiled officers from public institutions.

So how did they do that? Is it only through the military institutions, media, judiciary and institutions that they have captured?

No. By organizing within the CHP (Republican People's Party), they achieved this by never leaving the top positions of this party to anyone else. It is necessary to read this article carefully in order to understand why they did not give up on İşbank, which was founded by usurping the public money.

During the War of Independence, even in the declaration of the National Pact, the Law of the Ottoman State, the Constitution, was valid. In fact, the second article of the constitution was "The religion of the state is Islam". First of all, they changed this article. They removed the article “the religion of the state is Islam” from the Constitution of the Republic of Turkey. And they shamelessly say, “let's go back to founding values”! Whatever you say, it will not be enough to them…

Constitutional amendments continued under the rule of a single party, without public consultation. For example, they made a definition of citizenship that includes non-Muslim minorities, namely Armenians, Greeks and Jews, by introducing the term "Turk".

"Turkey in terms of race and religion to everyone without Being distinguished citizenship 'Turk' is called" with the phrase "renegades" is the name given to people from other faiths at a time, "Turk" was just came to life. When the surname law was introduced, all traces of the past were erased and the anthem "We have created fifteen million young people in ten years from all ages" has begun to be sung. After that, "How proud who says I am a Turk!" his words began to be constant refrain in the mouths of state administrators.

Let me tell you a memory that I still cannot forget, after years have passed.

We were making a port visit between the Sea Wolf Training. There was a dinner attended by ship officers at the officer's club in Izmir. I had to attend the dinner unluckily. During the dinner, a raki glass was sent to me by the ship's commander.

As I ignored this, the ship's commander called out to me, "Vehbi, I sent you a drink. Why don't you drink?" he said. And I said to him graciously, "Commander, I have never drunk alcoholic beverages in my life, and by my principle I will never drink." He said, "I am the ship's commander, I order you to drink."

My mood at that moment was "I would never drink alcohol if they cut my head too." But the commander insisted. Even worse, all the officers at the table were looking at me angry and trying to beat me with the glances that means “you've disgraced us all, drink this damn beverage.”

This disgusting story continued for a while as the commander, who was drunk, shouted at me. Such that; The commander's voice was heard from the side tables and he started to react. Finally, Chief Engineer Captain Ümit intervened and tried to calm things down by saying "My Commander, Vehbi is a very good officer, excuse him this time." Finally, the commander came to reason and shut up. After that, I was never invited to or attended the cruise ship meals again.

Unfortunately, for long years, religious and faithful officers were subjected to a practice called "drink test" to discourage their sensitivity to alcohol. In this way, all kinds of pressures imposed on us real Turks yielded results and a continuous coup period was experienced in every 8 to 10 years.

I hope this process ended with the FETO coup on 15 July 2016. After that, I hope no officer asked, "Why don't you drink alcohol?" and there is no such pressure.

This incident that I experienced continued in our country in different ways. It is useful to give a few more examples regarding the pressure exerted on Turks and Muslims:

The sad story of 146 Azeri Turks who escaped from Stalin's persecution and took refuge in our country should also be mention. In fact, they did not hesitate to be taken care of the Turkish homeland in which they took refuge, and the Turkish brothers. So, they were Turkish and Muslim, moreover, they were human.

But, despite the pleas of our Turkish brothers, there was a one-party government system which was deaf. They had received a "rejection" response from Ankara. These brothers said, "Please, do not surrender us to those fierce enemies, if necessary, you can kill us”. Even if they said, "We would have died at least in our own homeland under our own flag," there were indeed people who were brutal and deaf.

The police station commander had to hand over 146 refugees to Soviet Russia again, who was crying but he had to. 146 Turks who surrendered to the Russians were immediately tied and killed by shooting in front of the eyes of our soldiers!

It is said that in 1944, an officer who took the Turks by order of İsmet İnönü lost his mental balance after seeing this massacre made right behind the bridge and died in a mental asylum. From the laments of the betrayed Turks and their relatives in their homeland:

The enemy is waiting, he added me in front of him,/ My brother got rid of me in the bazaar where life was taken./ I turned and shouted back to someone with no mercy,/ I wish you shot me, instead of the infidel”.

Let's give a story from the Ottoman dynasty family, one of the most important Sultanate family of Turks:

"I am78 years old. Since I do not have the power to even leave the room, it is materially impossible to be subject to the decision in the end. I ask you to let an old man like me, who has no share of life, spend his upcoming last days in his room. Seniha Binti Abdülmecid”

But the request of Seniha Sultan was not taken into account, and this noble Turkish dynastic family was expelled from Turkey.

Though, to the children of the country who remained in the country, these people who became Turk and look like Muslim; They continued to commit various kinds of cruelty. The gains of the national struggle were used against the Anatolian people, despite people do not want. Gendarme officer Turkish soldier was obliged to strike with butt his people because he was reading the Qur'an.

Anatolian people lose thousands of family members in their narrow trees because of an infidel hat imposed on them. Deputies chosen by the nation were beaten, even Prime Minister Adnan Menderes was executed. At the end of each coup, thousands of Muslims are told to “perform a ritual” and thrown into prisons, tortured, convicted, hanged, and eventually their voice is muted. Writers who express this situation are devastated at court gates and dungeons.

On the other hand, the Turkish passport was like a lifesaver during the Second World War, when the Nazis committed the great genocide in history. Because Jewish citizens of neutral countries such as Spain and Turkey were excluded from concentration camps. During these years, our 19 diplomats working in various parts of Europe saved the lives of 185 thousand Jews by giving them Turkish passports.

This is the privileged generosity which is not given to real Turks; described in a documentary film. It has been shown very well that Turkish diplomats are struggling with heart and soul not to send Jewish citizens to concentration camps. In the documentary, it has been discussed with nearly 60 witnesses, historians, leaders of the society, the people who lived through that process and the families of the diplomats who saved them.

Another story about Jewish citizens is the 19 altruistic ambassadors of Turkey. For example, the Consul of Rhodes (1943-1944) Selahattin Ülkümen saved 1,700 Jews from going to the gas chambers with great devotion at the last moment. İnönü honored him by printing a postage stamp on behalf of the diplomat.

On this occasion, in addition to their deep gratitude and medal, they were also awarded the Jewish courage award in 1990 by a Jewish association from the USA.

Yalçın Küçük, this minority by dramatizing the situation of being renegade diplomats "must be renegade to become ambassador in Turkey," he said.

Now I hope you understand a bit of what the saying "How happy I am renegade" means. If we consider the issue in terms of population, the issue will be better understood.

When the Republic was declared on October 29, 1923, the population of our country was determined as 13 million. Most of our people were women, elders and children. Everywhere was full of our veterans who returned from the war and whose legs were severed.

The rest consisted of non-Muslims living in cities. This minority was educated and spoke at least one foreign language, and the Ottoman state did not enlist until the last period, and it constituted the ruling class.

These non-Muslim minorities, who have our identity with the surname law, settled in finance, law, education and military institutions and revealed the military tutelage system. The richest lands, especially the seaside settlements, have always belonged to these minorities.

Nobody could put an account to this minority, which blocked the way of very few Anatolian entrepreneurs under the name of "green capital". On the contrary, they always seemed innocent, even though they were guilty by calling an account. Now the situation is not very different. These people, like chameleons, who put themselves in color-by-color sheaths, are among the most important institutions. This is an issue that requires a little thought and tidy up.

The solution, as I mentioned earlier, is very simple. The only method that will pave the way for Turkish and Muslim society; free market pattern and freedom. Because it has always been the parasitic community we call this renegades that has been get strength from self-interest. They hire Masonic lodges and try to take the bread out of hardworking Muslim people's mouth.

For this reason, the state should be minimized and the civil service should be taken from people and transfer to computers that do the same job with zero error without bribing. It is necessary to give jobs that computers cannot do to people who love their homeland and do not work for money, who are primarily aiming to serve their homeland, so that the number does not exceed 100 thousand.

If the citizen gets rich, so does the state. For this reason, it will be the most important action for the state, which is still the biggest employer, to pave the way for the private sector by ending the looting and plundering of these renegades, and to remove the bureaucratic obstacles against our entrepreneurial citizens. That’s it…

More in this category: « A Truce Again When We Have Achieved Victory Science Can 't Be 'Secular And Laicistic', But It Becomes ' Atheist Or Theist’ »
Login to post comments
back to top