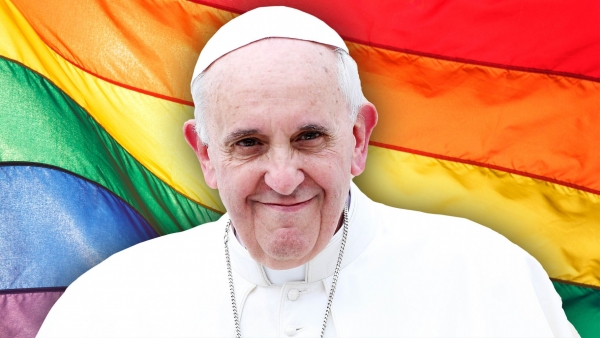 The Pope, leader of the Catholics, the largest group of Christianity, is on the verge of putting same-sex marriages in church teaching and blessing homosexuals.

Pope Francesco, the religious leader of more than one and a half billion Catholic Christians in the world and the president of the Vatican, decided to legalize the so-called 'marriages' between homosexuality within the church doctrine. According to this, not only homosexuality will be accepted as normal, the marriage of two men or two women will be done by solemnizing marriage consecrated in churches. At the same time, sexual acts of homosexuals against each other were also removed from being perverse and adultery by Catholic Christianity. The Pope explained this in a television documentary program. The film will be released next Wednesday at the Rome Film Festival, film named "Francesco".

Argentine Cardinal Jorge Mario Bergoglio, who used the name Francesco, came to power after the resignation of the previous pope named Benedictus XVI., Joseph Ratzinger, who defended the Catholic church to remain in traditional religious teachings, in a dubious Vatican coup. The pope, a member of the notorious Jesuit sect and a former nightclub employee, made the Theory of Evolution unquestionable, questioned established Catholic teachings, and signaled that he would make fundamental changes.

This move will put societies struggling against the issues of perversion, the Istanbul Convention, and homosexuality into a trouble, especially in Catholic countries. For example, while Poland, the most dominant Catholic country in Europe, is trying to get out of the Istanbul Convention, these steps will be more difficult for the public who are affiliated with the Papal office.

This decision will also enable the legitimation and spread of homosexuality and other perversions in Latin America, Africa and Asia with large populated Catholic countries such as Brazil, Mexico, the Philippines, the Democratic Republic of Congo. Although the exact number is not known, there are between one and a half and two billion Catholics in the world. In Turkey, there are autonomous churches associated with the Papacy, Syriac, Chaldean and Emeni Catholic churches, while there are Catholic churches affiliated with Levantine citizens. In Catholic Christianity, what the Pope said must be adopted without discussion.

In the Catholic world, especially as a result of the recent clandestine activities, the number of homosexual priests in the church organization has increased and they have spread to almost every country, especially they are mentioned with the rape of children. Now some marriage-like partnerships will become common among priests. In the 21st century, we have entered the age of priests and congregations whose homosexuality is consecrated by the church. Earlier this month, the Pope advised parents to boast of their "homosexual children", claiming that God loved them this way.

Last modified on Thursday, 03 December 2020 09:47
Tweet
Published in News
More in this category: « Islamophobia: The Footsteps Of The Muslim Genocide "Islamic State" Game »
Login to post comments
back to top