Nuclear Fiasco or Bluff of Putin!... 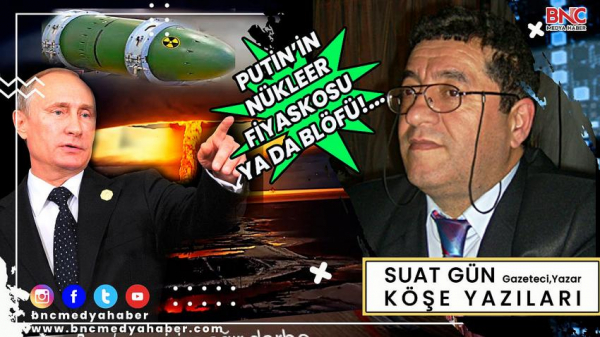 Journalist and Writer Suat Gün, unlike other analysts, from the first day of the conflict, he is making point shooting with his analysis!.. In this column, Gün evaluates Putin's "I use a nuclear bomb" statement. In addition, in the face of the Russian nuclear forces increasing the level of readiness and alarming; can Russia use these forces first of all? What happens it uses? How much does it use under what conditions? It also provides answers to such questions. Here is Suat GÜN's article titled “NUCLEAR FIASCO OR BLUFF OF PUTIN!...”

First of all, I would continue to evaluate Russian national security policy, but in the face of the Russian nuclear forces increasing the level of readiness and alarming; can Russia use these forces first of all? What happens it uses? How much does it use under what conditions? I think it is necessary to make a primary analysis about the lessons to be learned.

Russia wants to defeat Ukraine before the Western arms aid begins. If it fails to do so early, Ukraine will receive air defense and anti-tank weapon support. If this support is received, the Russian Army will taste a bitter defeat. Ukraine has already released the captured Russian military documents. The Russians decided to invade Ukraine on January 20, they planned to invade within 15 days starting from February 20. But of course, things may not go as planned.

The West met this unjust attack with a great reaction, embargoes and sanctions, and implemented measures that may collapse the Russian economy. It seized the reserves of the Russian Central Bank.

The Russian Central Bank reserves were said to be $1 trillion. Russia is unfair to invade Ukraine, but it is equally unfair to seize Russia's property and money. In the face of this injustice, if they had said that Russia would use nuclear power to return the seized money, this threat could have been judged to have a realistic basis. But they did not say that. So, what is this threat for? To prevent weapons aid to Ukraine? To intimidate NATO and the EU? To say that “if we actually need it, we will use our nuclear weapons”? There is no clarity on this issue…

Russia knows that EU countries and Britain will provide military aid to Ukraine and will not be able to prevent these aids. As long as these aids continue, it will not be possible to emerge victorious from Ukraine. In this case, for what reason will they use the nuclear weapons, they do not know that either?!

What I guess it means that: “If I get overwhelmed, I will start using tactical nuclear weapons on Ukrainian lands".

So, can Russia use strategic nuclear weapons? If so, what would the scenario be like? It is necessary to evaluate this issue.

Roughly, both blocs have around 6,000 nuclear weapons each. Let's imagine they are used. Since these weapons are kept in storage, at least 25 percent of them will not work. At least 25 percent of these will be dropped or destroyed. In mutual shots, at least 25 percent of them will be destroyed on the spot or they will not be able to be fired, so a total of 1500 weapons will be used against each other. If they hit their target, even if each weapon causes 200 thousand deaths, the total casualties will be around 600 million, the stocks will run out, and when the war is over, Russia will disappear. The total population of Russia will be 140 million, if half of the population of Western Europe 450 million USA 350 million dies; Canada, Australia, New Zealand and the UK will survive even if their populations are halved. Moreover, the West will survive with a maximum of 20 percent damage. Russia will be completely destroyed.

We think that if Russia turns the bluff into reality, it will be erased. This has to be calculated by the Russian National Security Council. Moreover, Russian weapons are bulky, low in accuracy and insufficient in terms of technology.
If Russia attempts to use nuclear weapons in order not to be defeated in Ukraine, the fate of the Russian rulers will not be different from Hitler.

Results and lessons: Russia is bluffing, it cannot use nuclear weapons. It will not use it. If they use it, the fate of the Russian rulers will be very bad. The second point is: Allah also has a judgment. You should not have the curse of the oppressed, there is a divine judgment. In Syria, Russia killed at least 100,000 people with air bombardments. You have one's curse, it will take effect. Who seeks trouble will find it. The third point is: You should keep your reserve money in your own control, not in other's central banks. You should keep your reserves available to your own control! Fourth point; There is no rule that says nuclear weapons will not be used.

Why is it there, if it is not going to be used? Why is something that is not needed produced? If something exists, then it means that it is needed. It will be used when necessary, there is always the possibility of being used arbitrarily against nations with weakness. For this reason, it is imperative that our country quickly acquires nuclear weapons and their means of launching them. Contrary to popular belief, a nuclear armory is 5 times cheaper than a conventional weapon armory. It is possible to achieve a high level of nuclear deterrence at very little expense. Fifth point is: Ukraine is an advanced country in the defense industry. The technical staff of this country will disintegrate. We should bring Ukrainian engineers and R&D specialists to Turkey as quickly as possible.

More in this category: « Russian Soldiers Thought It Was Military 'Drill'! The Truth Revealed During Interrogation! ASSAM Vice President Ali Coşar's Evaluation: Published in 2015 and Shedding Light on Today »
Login to post comments
back to top