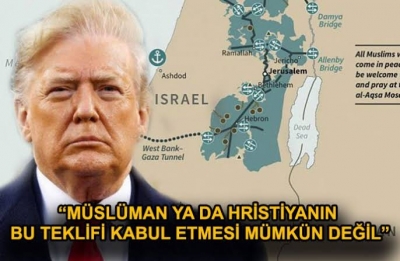 Although it is an unfamiliar word for new generation, our generation knows very well what is tried to be told when it comes to Malta.

In Malta prisons, it is used to mean the prison yard with a ceiling surrounded by walls and sky where prisoners go out and pace at certain hours.

Donald Trump, like a victorious head of state, took Benjamin Netanyahu with him and announced the establishment of the Palestine Prison State.

He not only declared it but also implied that it was an indispensable opportunity for the Palestinian people for the future.

Trump went in front of the cameras as if he were offering them a historic opportunity, instead of saying to the Palestinians that he imprison them and let them pace back and forth in prison yard for twenty-four hours to get some fresh air.

When you look at the map Trump announced on Twitter, you will agree with the title I wrote. The map definitely brings to mind the prison yard of a closed prison surrounded by high walls.

It is quite normal that such a map is published by Israel and the USA. What is unnatural is that it is not questioning how Israel, which stands like a dagger stuck in the heart of the Middle East in the region, has become such powerful.

There is a tangible Six-Day War in this struggle in history. However, it also remains as a defeat in the history.

Six-Day War cannot be any worse than Egypt's current invertebrate stance, though. One has divine light, other has filth.

And what about he is not neglecting to thank the UAE, Oman and Bahrain as if he were making fun of the scattered Islamic World?

Though he forgot Saudi Arabia or for some reason did not mention its name, but it does not matter. We already know the position of Saudi Arabia.

This deal is definitely a different plan and a time saver.

You may have understood that when Trump said that he will give a piece of East Jerusalem, he meant the area of ​​Abu Dis, which is outside the wall of shame. It also gives a way to the Muslims residing there by making a way in the form of a corridor. Do not be so unfair.

With this agreement, Palestinians will get rich and be disarmed at the same time. They will pace in the prison yard corridor in isolation from the world. Palestine, which becomes secularized and disarmed while enjoying its wealth, will be an easier bite to swallow.

First of all, the Palestinian people will never consent to this. As a matter of fact, Mahmud Abbas said "Palestine is not for sale!" Turkey states its attitude by saying, "Palestine is our red line."

While Trump made this statement, our President was addressing the African Geography in Senegal. ASRICA was busy with establishing a bridge that would increase economic cooperation and then extend to unity in all areas.

Who knows, maybe the US made this statement by targeting this visit of our President.

But it is in vain. They will not succeed anymore.

Perhaps Netanyahu and his friends were the first to notice this.

That is why we should be concerned with external conspiracies, not internal disputes. Otherwise, these lands that were inherited to us with blood will disappear from our hands one by one.

However, there is no need to worry. Because we saw in the Euphrates Shield, the Olive Branch, the Peace Spring and at latest Libya Resolution, Muhammad's Army is Back.

Go and Tell Israel; "Muhammad's Army is Back!”

More in this category: « ‘One minute!' to America from Ummah
Login to post comments
back to top