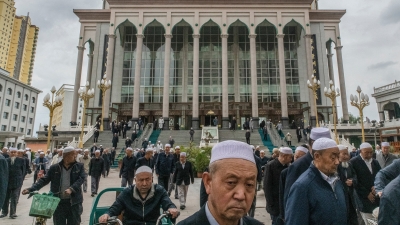 No one supported the Turkic Uyghur Muslims, and now the pressure on the Chinese Muslims has begun.

When China and Muslims are mentioned, we think of the oppressed Uighurs, who are the brotherly Turkic society, and partly Turkic peoples such as Kazakhs, Kyrgyz and Salar. However, we know very little that the number of Chinese Muslims in China has higher number than the Turks, they can be found easily all over China. Unfortunately, the persecution started against them today.

The history of Hui Muslims goes back to when the first mosque in China was built during the Companions of Prophet Muhammad period. Hui Muslims are the Chinese who found the true path. For a while, they managed the economy in the country, gained great importance, but they were subjected to massacres and genocides for centuries.

They live in every region, especially in the central part of China. Their population is controversial because they are counted as Han, whose native is Chinese and means Chinese race. Assumptions are made between 10 million and 60 million, which is the official figures given by the state. Their most sensitive point is halal food because they live in a Chinese dietary culture which is mainly based on pork.

When the Muslim world did not speak much about the persecution of the Uyghurs, the pressure against Hui Muslims started to increase recently. First of all, halal food distribution, shop and restaurant systems, which are their lifeblood and which are the characteristics that distinguish them from the Chinese, but also their main economic resources, were targeted. Then, with a decision last year, the domes of the historical Hui mosques, Arabic inscriptions and minarets were targeted, and these were started to be demolished with the claim that these were betrayal to Chinese culture. Arabic inscriptions inside mosques and Arabic calligraphy and Kaaba pictures of Muslims in houses began to be removed by the Chinese state this year.

According to some reports, a social point scoring application was launched for the Huis, which scored citizens according to the concentration camp system and Internet behavior applied to Uyghurs and decided whether to send them to the camp or not.

With their 1400-year history, Hui Muslims are struggling for existence in a difficult period.

Last modified on Wednesday, 12 May 2021 13:52
Published in Super Powers
Login to post comments
back to top