Determination of Nation for Democracy (April 2, 2014) 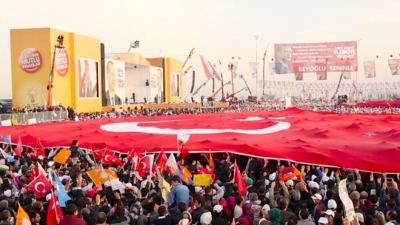 It is a fact that the general attitude of the people in Turkey has been in favor of human rights and freedoms, but since the so-called libertarian Committee of Union and Progress, a coup-plotter totalitarian mentality has been influential in the state. The most determined democratic stance of the nation against that mentality was realized under the leadership of Prime Minister R. Tayyip Erdoğan.

The most obvious feature of those who support the coup-plotter mentality is summarized in the phrase “It is not about Gezi. Did not you understand?”, which they used during the Gezi Park protests. Let alone those who believe in them, the nation understood that strategy very well. Just as Gezi was a pretext, the method they tried on March 30, 2014, local elections was also a pretext that they could not make it.

In this article, the subject will be discussed with the explanations of the Islamic mystic-philosopher Attar of Nishapur of the twelfth and thirteenth century and the Western philosophers of our time, and some events in the history of democracy. As a result, some basic expectations from the Turkish Armed Forces, National Intelligence Organization, and the public will be expressed.

The assassination of the Subject of “Democracy”

Both the “Republican public meetings” and the “Gezi Park protests” were efforts to draw citizens away from common sense and into mass psychology, with some excuses. The aim was to overthrow the AK Party government in an antidemocratic way. Because, as José Ortega y Gasset said, the masses of people who have lost their self-control are inclined to lynch and to destroy, not to build.

Before the last local elections, the individuality of the citizens was destroyed, their personal preferences were forgotten, and an attempt was made to stage a coup against the AK Party, so-called in a democratic way.

Of course, in democracy, some citizens may want to overthrow the government through elections, but they try to replace it with a political cadre that they like. And this is the most democratic right of individuals in the kind of social structure that Karl Popper calls “Open Society”.

In these elections, some sections organized as a closed society called on the citizens to vote for the strongest party in their region, other than the AK Party, instead of their own preferences. The fact that the parties wanted to be directed were the CHP, MHP, and BDP, which had almost no commonality with each other, was of a nature that did not care about the beliefs and views of the citizens. This should be seen as a coup attempt not only against the government but also against the individual, who is the subject and basis of democracy.

Democracy is a “human right” today. This order includes measures to ensure that administrators are elected and to protect human rights.

Like every human right, the subject of democracy is the individual as a citizen. An individual can buy and sell property, even file a divorce suit to his spouse, but cannot transfer his right to vote and to be elected, through another person to whom he or she has given power of attorney. Attempting to manipulate the right to vote with some democratic-looking tricks is excessively selfish to harm democracy.

The large majority of the people were not influenced by the “Republican public meetings”, the Gezi Park protests, and, finally, the organized groups that wanted to direct themselves to the strongest party in their region other than the AK Party. However, the public said, “NO! to the mentality that gave the public no other option”.

This preference of individuals was also evident in the pre-election polls. However, the high rate seen in the number of “undecided voters” in some surveys made one think about the possibility of a decrease in the voter turnout rate. This negative situation did not arise. By choosing the AK Party, a much higher rate was achieved than in the previous local elections.

The result resembles a selection and determination described by Attar of Nishapur in his mystical work “The Conference of the Birds”:

Seeing that no country is without a ruler, the birds gather together and decide that they too must have a ruler. They agree that order cannot be maintained without a ruler. According to the Eurasian hoopoe bird, the messenger of Prophet Solomon, there is already a ruler named Simurgh and he must be found and chosen.

Convinced of the truth of the hoopoe bird's words, the birds follow him in search of Simurgh. Only thirty birds reach Simurgh after an ordeal, some of which perished and some of them followed the devil and went astray. The ones they call “Simurgh” are actually themselves. Simurg tells them:

Institutions Should Also Be Committed to Democracy

In fact, democracy is a regime that has been reached in other countries after very difficult struggles. It is a historical fact that in countries where the regime is most successful, the army also adheres to what the people choose. The best example of this has been experienced in the USA.

Before the elections in 1860, it was predicted that Abraham Lincoln would be elected as the President of the USA. Although the seven states in the south declared that they would start a civil war if he was elected, General Scott, the Minister of National Defense, did not interfere in the elections and Lincoln was elected as expected. Although the Southerners who had indeed started the war had declared that they would stop the war if he was removed from office, the General did not do so. When Southern soldiers got too close to the White House, the General offered the President to take him and his family to a safer place. But when the President's wife said, “The people brought us here. Your duty is to defend us here” General Scott gives the following marvelous answer: “I beg your pardon. I should not have made such an offer. We will defend you here until the end.” The unity and democracy of the United States today is due to this.

Expectations from Institutions and Citizens

Experiences since the Revolution of the Committee of Union and Progress have shown that in Turkey, the commitment of the people consisting of individuals to democracy is not enough, the Armed Forces and intelligence agencies must also show the same commitment.

It is obvious that the National Intelligence Organization did not inform the governments of preparations for the revolution in the past. It cannot be denied that the Armed Forces had a revolutionary attitude until recently. The attitude that these institutions should take as an example should not be from backward countries in every respect (aside from their mistakes in foreign policy), but from advanced democracies such as the USA, whose historical background has been cited above. Knowing the fact that what is global is in the local one, just as what is local today, should increase that sensitivity even more.

The recent positive attitude of both institutions seems to be fully compatible with our people’s commitment to democracy. For the healthy development of democracy, the expectations of the citizens from each party should be in line with the continuation of this harmony.

More in this category: « Bir ASSAM'lının Demokrasiyi Demokratik Sorgulaması
Login to post comments
back to top