“We Are Ready!” Against the Asymmetrical War 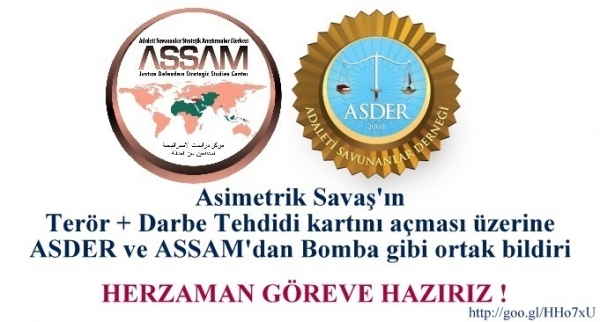 The colonial ambitions of the “Imperialist Global Powers” on Islamic Geography is a well-known fact.

These powers, which caused two great world wars in the last century and shed blood on our world, established their dominance with the military and economic power they reached and became effective especially in the Islamic geography under the threat of using force.

The occupations of Vietnam, Afghanistan, and Iraq have tired the USA and the USSR, which we see as superpowers, and have shown these countries and global imperialist states that no country can be controlled by using military force.

Imperialist global powers, despite their activities in the United Nations Security Council and their military presence, realized that their control over the world was about to come out of their hands and they went “UNDERGROUND” in the struggle for world domination. They have lost their ability to fight openly. With the awareness of this, they fell into fear, worry, and panic.

The 21st century has started with the practices of “ASYMMETRICAL WAR”, in which perfidious, insidious, dirty, treacherous, and immoral methods are used blatantly and recklessly, and the practitioner can easily hide.

Today, the Imperialist Global Powers are causing the Islamic World to experience the dirty and insidious “ASYMMETRICAL WORLD WAR III” by using the ethnic and sectarian differences within the Muslim States, the traitors within the countries, provoking and organizing, training, equipping, arming, and colliding them with each other.

As ASDER and ASSAM members, we are aware that global attack strategies have changed in our century, and that the Islamic World, especially our country, is the “Target of Global Attacks”. We are also aware of the fact that, as the price of living in the most important geography of the world, we must be determined to struggle continuously and uninterruptedly to maintain our existence and sovereignty. We are aware that our nation has the same feelings, thoughts, and determination.

Propaganda, which is the weapon of psychological warfare, is also the most used and effective instrument of asymmetrical war. It is a far more effective weapon than sabotage, raid, destruction, ambush, and assassination. The target of propaganda is emotions and thoughts. It tries to exert its effect by instilling fear, showing wrong as right and right as wrong, causing anxiety, pacifying, alienating the nation from its rulers, weakening the authority, and fueling the feeling of disobedience.

We feel the effects of global asymmetrical attacks in our country.

In addition to the Ankara Attacks in October 2015, February, and March 2016, the Istanbul Sultanahmet attack in January 2016 and the bomb attack in Diyarbakır police service vehicle, our nation has also been heavily targeted by dirty and black propaganda.

First, during the Nawruz week, the dirty propaganda that terrorist organizations would carry out bomb attacks on public transport centers was used by social and some national and international media outlets to try to affect social, economic, and political life.

The news aimed at provoking delusion and anxiety on our nation has been brought to the agenda, then, “when there was nothing”, based on transoceanic sources, news that “some staff in our armed forces are preparing for a coup”; to destabilize, to overshadow the active, effective and successful fight of our Armed Forces against terrorism in the national and international arena, by people and groups whose credibility is doubtful; to bridge the gap between the political will and the General Staff; to cause discord among the command levels of our Armed Forces, to destroy the spiritual bond that has begun to form between our heroic army and our nation.

As members of ASDER and ASSAM;

Also, we wish success to our President, Chairperson of the Parliament, Prime Minister, Government, Ministers of National Defense and Interior, Chief of General Staff, Army, members of the Police, and public officials. APRIL 02, 2016

ASSAM President of Board of Directors and