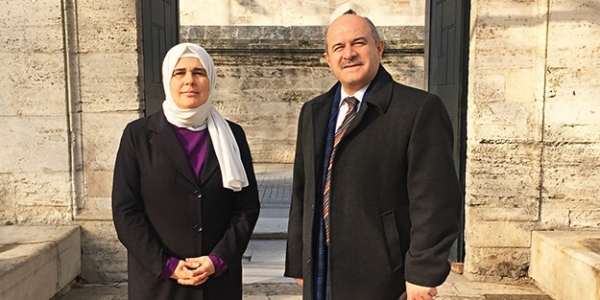 Nowadays Libya occupies our agenda mostly... ASSAM Strategy and Security Specialist Ali Coşar, by explaining the importance of Turkey's soldier deployment resolution and continental shelf agreement, said, “The security of the country starts outside our borders. The Turkish opposition parties, who does not understand this, unfortunately serves the enemy.”

Although the agenda changed with the murder of Qasem Soleimani, one of the most important agendas of Turkey is the Libyan resolution. Turkey's enemies continue their insidious plans. As a country, we are in a period where we need to be more careful than ever. We talked about the issue, which is a very strategic step for the future of the region, the resolution and the issue of "why we have to exist in Libya" with ASSAM Strategy and Security Specialist Retired Colonel Ali Coşar...

-  Some part of the public, especially the opposition parties, do not understand the importance of the Libyan resolution. At this point, can we learn from you the purpose of the resolution?

The Presidential resolution envisages sending soldiers to Libya to support the Tripoli government, which the United Nations officially recognizes. These decisions are parliamentary decisions. It constitutes an example of one of the decisions regarding the relations of the legislation body and executive body. The decision to send the Armed Forces abroad are out of the judicial review of the Constitutional Court as they are based on political preference and discretion. The Libyan Resolution, which will be valid for 1 year, officially paved the way for the Turkish soldiers to be sent to Libya.

Their purpose is oil resources

-  Sir, what are the imperialist states planning in Libya?

We see once again the emergence of the efforts of the Imperial states to realize their plans within the scope of the Greater Middle East project in Libya as well as in the Islamic countries of the Middle East. In order to share the underground and aboveground riches of this country, they are trying to establish a puppet illegitimate administration under the leadership of Haftar who is friend of Imperialists. In this way, they are trying to establish a Libyan Administration that is under their own influence through Caliph Haftar, as well as in countries such as Israel, Saudi Arabia, Egypt, UAE, and Bahrain which is also known as the "Arabic NATO". Thus, they intend to continue to exploit rich energy resources by giving a small share to the tyrannical dictators under their control, which they bring to the administration of Islamic countries.

-  What is the strategy of Russia?

Russia is also in the trouble of having a share from these "Carrion Crow" fights of the western states. Just like the US and British Private Military Companies in Iraq and Syria, it secretly took the members of the Private Military Company Wagner, called "Little Green Men" into the field alongside his official armed forces in Ukraine and Syria. It supports Haftar's administration with "secret proxy power". Russia, despite many strategic cooperation with us such as S-400, Sochi and Astana processes, is willing to confront Turkey by following a different political and military stance in every geographical area. Turkey has increased its military support, which has intensified both based on its historical and cultural ties inherited from the Ottoman period and by acting on the fact that it is neighboring Libya by the sea.

- What do you think about opposition parties are opposing the resolution in such a situation?

In Turkey, the opposition parties are against all the beneficent services of government (Bridges, Marmaray, Eurasia Tunnel etc.) as well as this solution. They have an incomprehensible attitude, as if they are not a potential alternative candidate for governance of this country, but they are acting as a spokesperson of enemy countries of Turkey. Opposition parties argue that Turkey should sit like a good boy without interfering in anything in its region, also not step outside its borders. The truth that can be understood from this attitude is this: The Opposition parties is not national and sees no problem defending the interests of the Imperial states. They reveal their intention to act in the same way as puppet leaders and governments in countries such as Egypt, Syria, Iraq and etc. which were brought to power with the support of a secret coup with various plots to act in the dead water of the Western states. They believe that they will be moved to power in Turkey with the help of the states of which they defend their interests. However, the protection of national borders now depends on eliminating the threats that appear hundreds of kilometers ahead, early and before reaching the borders. If we do not do this, we will be unable to protect even our homeland and seas.

-  Will Turkish soldiers succeed against enemy forces in Libya?

It will make it with the permission of Allah. Because the Turkish Armed Forces has overcome the world's most powerful terrorist organizations both at home and abroad. These terrorist organizations have been supported by approximately 50 thousand trucks and hundreds of cargo aircrafts full of the most modern warfare weapons and vehicles for the last 5 years, and have been trained and equipped and taken consultancy support by especially by the USA, Russia and other Western imperial states, retired Israeli officers. The Turkish Armed Forces is one of the strongest armies in the world today, as it has been in many periods of history. It has gained a great warfare experience for 35 years, especially in the last 3 years. It is a deterrent and increasingly uses national and domestic defense industry products.

We can protect Libya in every area

But... If it is asked; "Can Turkey deal with powerful imperial states such as the United States, Russia and France, which are trying to have influence on the ground through hostile states such as Egypt, the UAE and Saudi Arabia, which are openly and secretly exist in Libya?” These states need cooperation with Turkey elsewhere in the world. If the war is inevitable where diplomacy is blocked, if Turkey, which actually exists on the ground, meets with the imperial states that support Haftar, it will be possible for the Libyan GNA to survive and recover as we protect our national interests.

For this, it is necessary to take a look at what has happened recently. The "Arab Spring" revolutions initiated by the Great Western States in 2010; They created an environment of civil war by triggering Islamic countries such as Tunisia, Libya, Egypt, Syria and Yemen. Gaddafi, who took over the power with a Socialist revolution in 1969, was overthrown in 2011 with this method. In the chaos that emerged after Gaddafi, two governments were formed. The Tripoli-based Government of National Accord (GNA), which is legitimately registered by the UN, and the illegitimate government based in Tobruk, led by a former general named Khalifa Haftar. Haftar who is supported by the United States, Western states and some Arab countries in order to create a puppet state for them, was assigned to fight Chad during the Gaddafi era, but instead defied Gaddafi by agreeing with Chad. Because he was declared a traitor, he fled to the United States and was protected for 20 years. After Gaddafi, he was tasked with establishing a puppet administration.

Turkey has signed a maritime continental shelf agreement with the Libyan GNA. As the civil war environment in Libya began to develop against the GNA, in accordance with the naval agreement and requested by the GNA, Turkey approved the "Libyan Resolution" at the Grand National Assembly of Turkey in order to protect its sovereign rights in the seas. And this is in accordance with international law.

More in this category: « Should Islamic Countries Unite? Agenda of Chief Advisor »
Login to post comments
back to top