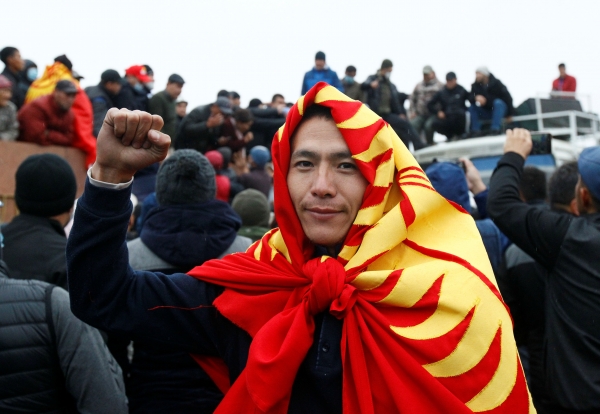 Kyrgyzstan's president held his first talks with Parliament to find a way out of the chaos engulfing the Central Asian country since the disputed election. President Sooronbay Ceenbekov consulted with Parliament Speaker Myktybek Abdyldayev on everything, including the possibility of terminating his post, his office said in a statement. Opposition parties claim Sunday's election was rigged through mass vote buying and that's why protests and riots in which at least one dead and hundreds injured, began. On Monday , the former president was released from prison and results of the vote were also canceled on Tuesday, but a silence remains before the parties make any new moves following the coup attempt. As of Thursday, representatives of the pro-coup opposition parties claimed that they had taken over the public prosecutor's office, the National Security Committee and the interior ministry and supported themselves.The judiciary, military and police are also the most entrenched places in the country, where FETÖ, traditionally a very powerful organization and believed to be one of the main elements behind the coup, is also the main one. Ceenbekov's office said they had discussed a number of issues with Abdyldayev, including government appointments. The presidential statement was the first indication that Ceenbekov accepted the results of an extraordinary parliamentary meeting on Tuesday, when Abdyldayev was elected as the new speaker of the parliament. The meeting was held at a hotel as the parliament building was seized by protesters and opposition groups refused to accept the emergency session as legitimate. They rejected the election of Abdyldayev as president, as well as the election of populist Sadyr Japarov as a candidate for prime minister.

While rival groups opposed the Premiership, clashes between supporters' groups in Bishkek continued. The current Prime Minister, Japarov, is a 51-year-old stubborn nationalist known for his opposition to the company that runs Kyrgyzstan's largest gold mine. He was released from prison on Monday, along with former president Almazbek Atambayev and several of his allies, from where he is serving an 11.5-year sentence for hostage-taking and other crimes by protesters in a night of tumultuous mayhem. Japarov assumed the Premiership after an extraordinary session of Parliament, as hundreds of his supporters flocked to the capital. A parliamentary spokesman said a majority of the Parliament, made up of about 70 lawmakers, voted for Japarov as prime minister. Japarov does not have enough globalist support because of his nationalist rhetoric and his case with the Canadian firm. Opposition forces supporting the coup in the Muslim Turkish Republic of Central Asia are also divided among themselves.

Last modified on Tuesday, 10 November 2020 11:42
Tweet
Published in News From The Islamic World
More in this category: « African Mercenaries Set Up Israeli Base In Yemen Azerbaijan Saved 13 More Villages From The Armenian Occupation! »
Login to post comments
back to top