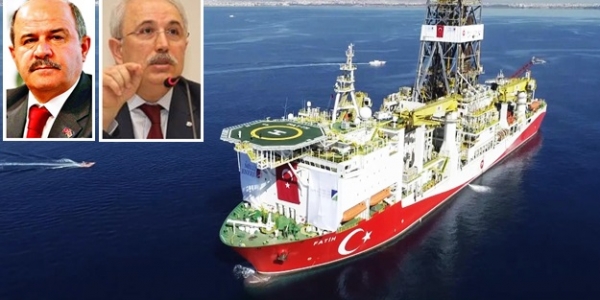 Evaluating the "good news" of President Erdoğan in the newspaper Akit, experts said that Turkey's strong steps on the field have received the most important consequences and a new era will begin.

Turkey's proactive strategy in the field, which has re-assumed its historic mission under the leadership of President Recep Tayyip Erdoğan, it also brings rewards. Enter the hangars instead kowtow before the Western states, without sleeping for days producing local and national technology as a result Turkey, to intervene immediately to the crisis in the eastern Mediterranean as a result of attempting to seismic exploration activities reached their massive natural gas deposits. Experts consider the historical developments that President Erdoğan will announce as good news on Friday as “the beginning of Turkey's new era”.

As long as we are active in the field, Allah opens the way for us.

Speaking to Akit, Retired Staff Colonel Ali Coşar Justice Defenders Strategic Studies Center (ASSAM) Strategy and Security Expert, said that century of Turkey will begin from this Friday. Strategist Ali Coşar said, “Our President will probably give good news of newly reached energy resources. Scientists had predicted the direction of the 21st Century will be the century of Turkey, I agree with it and I believe that Turkey's century will start officially from this Friday. The symbolic moves that started with the conversion of Hagia Sophia into a mosque on Friday, July 24, will continue with the good news to be announced from Friday, August 21. This is not an axis change, this is an axis elevation. Turkey rises by defying the superpowers. Turkey, which is active in the field, is opening its way with the help of Allah."

We are retaking our historical mission.

Ali Coşar, who stressed that Turkey has always had to meet its energy needs through imports, said: “Great breakthroughs have been made in the last 18 years in the field of energy. Recently, the step of the world's largest energy-producing solar energy facility in our country has been taken. In addition, there are successful operations in Syria in regions such as Afrin, Idlib and Jarabulus. A strategy that gives no room for active struggle against terrorist organizations such as the PKK. Domestic production AUAV, UAV and many more defense industry production. Focusing on wind energy, solar energy and nuclear energy. Our seismic research activities that we carry out in the Mediterranean and the Aegean without letting them to inflict our rights. When we look at all this as a whole, we see that we have retook our near and distant historical mission." He stated in this manner.

From this Friday, the Red Apple march begins.

"Turkey will no longer be dependent on energy and defense industry needs. “Coşar, who uttered his words, continued by saying: "Turkey, which will add strength to its power with natural gas resources, will soon be among the top 10 countries in the G20. Soon, we will be building our domestic combat aircrafts with the permission of Allah. The prayer of the oppressed, whose only hope is Turkey, is accepted. Turkey is rising which can stop blood flow and wipe away the tears of oppressed. Turkey is coming to distribute compassion and justice to the world, whether Muslim or non-Muslim. The Red Apple march will begin more clearly from this Friday.”

Coşar stated that if Turkey becomes stronger, justice and the oppressed will become stronger, and said, “I hope that the days are near when all Muslims will live in peace and tranquility under the shadow of the star and crescent." he ended his sentence with it.

We are reaching all our riches again.

Muhammed Taha Gergerlioğlu, President of the Istanbul Advisory Board of the Sahipkıran Strategic Studies Center (SASAM), said that Turkey's security policies, which are growing in the field of energy, will also gain momentum. SASAM President of the Istanbul Advisory Board Gergerlioğlu said, “There are serious findings about natural resources and natural reserves. The status of being the largest state in this regard, Turkey is to reach all the riches hidden or concealed. Solving the conspiracy in the Mediterranean region is something wonderful. It is necessary to add new policies to this. First, we have to look at the Ottoman, then the ummah, and finally the entire geography of humanity. The way the state is governed will change as great Turkey, also it has changed. It regains its characteristics of being a great state. However, its reflexes are also changing." he mentioned.

"When we used these reflexes in Turkey, it began to feel that other states were not great powers created in the eye and heart." Gergerlioğlu said, “In addition, serious self-confidence was achieved. And as an advantage of the presidential system, the start of the ‘direct decision-making’ mechanism allowed Turkey to get rid of the cumbersome bureaucracy. Turkey is a country that has revived all its organs since the Red Apple began to be created. These days are the way our country's survival of the shock which is happened after the First World War. The mission policy of the government takes effect rapidly. After that, Turkey is entering a great lane again. It regains its historic mission. Head-to-head challenges will continue. Turkey becomes a growing country by challenging."

Gergerlioğlu pointed out that the foreign threat of countries with growing economies and enriching underground resources is also greater, and said, “A serious security concept is required based on Anatolia. Establishing a security policy in the geography extending to the Mediterranean, Balkans, Caucasus, Syria, Iraq, Djibouti, Libya means stay comfortably in Anatolia. This is also done today. Turkey applies Ottoman policies from Ankara to the west, and Seljuk policies from Ankara to the East. I think this security concept of the new era is very accurate and in correct place.”

More in this category: « Importance of Hagia Sophia Mosque Situation Assessment in the Eastern Mediterranean »
Login to post comments
back to top