To Put the World in Order is White Man’s Burden 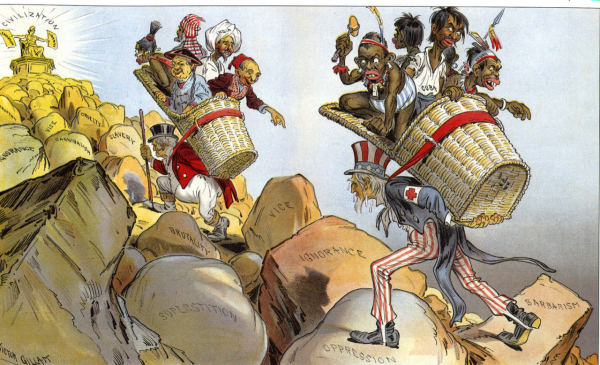 I began my assessment with the aphorism of Noam Chomsky's definition of imperialism. To put the world in order is white man’s burden. “White man’s burden”; Because without the substitution of economic freedom, arousing one’s appetite with political freedom will not be of any use to people. Imperialist countries are observing only one thing; if political and economic conditions are available for direct investments or will they be?

However, the interests of imperialism and full independence are at odds. As such, imperialism cannot tolerate the underdeveloped countries to achieve their economic independence. 3

Especially backward countries face constant intervention and violations of the imperialist system, from their basic economic decisions to the characteristics of their political regimes. 4

These countries, which are called politically and nominally independent; They are brought under financial and diplomatic control by the methods of lending, providing economic aid, and sending advisors. 5 The first interventions that comes to mind are "Eisenhower Doctrine", "IMF prescriptions". 6

In fact, the ruling class in the country is the general “Distributors” of the imperialists who market their industrial products. Therefore, it favors a controlled industrialization of countries that want to gain their economic independence in line with their dependent interests.

Industrialization is built on three pillars: Energy-Transportation-Communication. This is the reason why our country has invested in the field of Energy-Communication-Transportation in the last twenty years in order to be able to rise to the class of countries with advanced industry and to produce industrial products with high added value. Essentially, these investments are essential to become an independent economy.

In one word; energy means “production”.

Communication means the flow of information between raw material and production, production and consumer in order to provide supply and demand balance.

The privileged companies (Distributors), which have grown with the incentives of the country, have always tended to oppose investments in Energy, Transportation and Communication infrastructures. In fact, this is an ontological situation for the controlled bourgeois.

“No need for so many roads, airports, railways, nuclear power plants, solar energy panels, oil and natural gas wells, so many communication satellites?” in these criticisms; In fact, there is an “existence anxiety” at the basis of their excuses such as “These investments increase inflation”.

In order to keep the economic independence of the country in the orbit of their own interests, they ensure that writers, academics, politicians, bureaucrats, etc., convey incomplete and incorrect information to the public, in other words, disinformation, through biased media. When they see their interests in danger, they do not hesitate to trample democracy directly or indirectly. For this purpose, “military juntas” often intervene with the governments that come to power with the will of the people, and unfortunately those “military juntas” do not even know what/who they are serving.

In the political system defended by this dominant group, unfortunately, democracy consists of pluralism and political liberalism.

Some representatives of legitimate politics in our country do not operate in accordance with the country's objectives. Let alone supporting the above-mentioned efforts for economic independence, on the contrary, they do not refrain from being an intermediary, consciously or unconsciously, of activities aimed at preventing these necessary investments. The language used by the opposition sometimes transcends the rules of law. It is built on rhetorical political events and actions used by the opposition. Opposition political parties abuse freedom of thought by asserting the principle that there is no limit to thoughts in democracy. They sabotage all the services of the government with political discourses, relying on the provision that freedom of thought is a legal right not only for those who think in accordance with the Constitution, but also for “everyone”.

Unfortunately, the opposition political parties, which hide behind freedom of thought and expression, sometimes fall into the trap of disrupting the internal and external security of our state while trying to oppose the government in order to wear it down. They do not hesitate to provoke society by inviting them to actions that are truly considered criminal, to destroy public order, to encourage the use of violence against the state.

In this case, it is not a statement of thought, but an action or a call to action. 8 But democracy will defend itself. Like every regime, a democratic regime has the right to defend itself against the dangers that may be directed to its existence. 9

In the purposeful fake news published recently in our country, we are witnessing the efforts of the politics to restructure the society and the rules of law by looking at the events.

It is understood that we have entered a new era that the imperialist states, namely the “White Man”, as Noam Chomsky put it in his aphorism, staged in Turkey through collaborative politicians. It is possible to create some turmoil by creating insecure environments and weakening the central authority with political movements shaped by revolutionary or libertarian or nationalist material, such as the Gezi events, which mainly target the unity of the state. After this turbulent period, it is easy for imperialism to succeed in establishing puppet governments that it can play like toys in its control. In other words, the purposeful fake news of recent times is the harbinger of a new political engineering project being put into practice.

As long as the determination of our country in its struggle for economic independence against internal and external conflicts continues, this political project is doomed to disappear, just like other examples in the last twenty years. However, the task of government here is to continue to tell the truth to society in a coldblooded and embracing manner. It should not be forgotten that “the antidote to disinformation is information.” And also, "lies make noise, truth is calm."

More in this category: « We Should not Resign Our Own Flag! 'Goebbels Kemal' »
Login to post comments
back to top