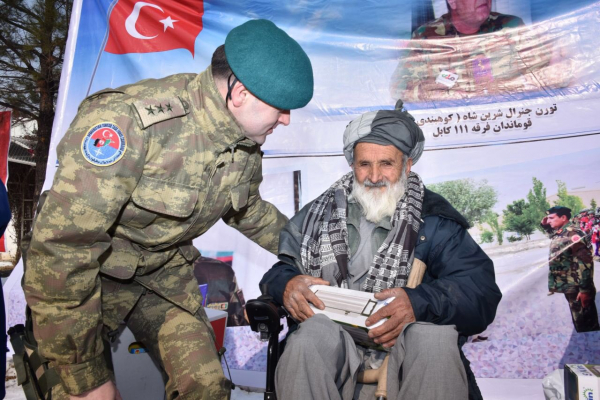 If you want to rule the world politically, you must be a strong and self-sufficient country in terms of economy and military. Otherwise, you will have to follow the policy determined by the countries which have the power.

Those who hung the late Adnan Menderes in 1960, those who gave the 1971 Turkish Military Memorandum, those who carried out the September 12 Coup, those who commissioned the February 28 Postmodern Coup, and finally those who attempted the 15 July Coup were all their lineage.

History was always repeating itself, but for some reason, the collaborators among us never learned a lesson. They were the ones who “closed” the aircraft factory out of loyalty to the nation, those who did not “investigate” the sabotage of the Gunpowder factory, and those who refrained from betraying this nation by not putting gasoline in the Devrim car and “not working”.

They are still within us. We are exhausted, but they are not. We were often in despair, but they never gave up. They have always seen the religion, national values, and moral belief system of this nation as obstacles to development and modernization. Western civilization has always been the ultimate goal to be reached for them.

Afterward, they took the terrorist struggle and foreign policies of the western states, which showed the Islamic terror wave as a threat to them, as their guide. They were establishing the groups they wanted, naming them, and adding them to the terror lists as they wished.

A similar fiction is about to be staged again in our geography, in Afghanistan; Taliban!

It is a structure that started with the madrasa education, which was established to place Islamic values in the people to break the influence of Russian socialism that started in the 1970s and took the name of the Taliban (Students). With the 1979 USSR invasion of Afghanistan, it turned into an armed struggle, and the western countries, especially the USA supported as a power to break the Russian and Chinese influence in the region.

It happened accordingly. The Taliban, described as Freedom Fighters, defeated the Russians, and then the USSR had to disintegrate. However, the USA and its supporters, who wanted to have the actual control of the region in their hands, started the invasion that would destroy the fate of a whole nation, using the September 11 attacks as an excuse.

And the Taliban were included in terrorist organizations. The Taliban, the legitimate government of Afghanistan, thus lost six years of power. We can say that the Taliban, who used the advantage of Afghanistan's geography with its mountainous terrain, gave the USA a second Vietnam experience again.

You know the rest of the story. As of August 31, 2021, the United States and NATO left Afghanistan. I will not touch upon the political and diplomatic consequences of this event. The only thing I want to reveal is the politics and relations network that should be followed about the Taliban.

The USA finally reached an agreement with the Taliban in 2020 and the result is as you know. Before all this happened, it is written that the US Army, which realized that it would not be able to succeed against the Taliban, was advised by the US CIA to “make up the perception that the Taliban treats women badly” for the Taliban to get into trouble in the world and the domestic public opinion.[i]

The USA and western countries were demonstrating what their interests and diplomacy required, and they were also trying to teach us moral and religious lessons. Although this was the necessity of their hostility, what happened to those among us? Why would we put the Taliban on the terrorist list, which has not committed any single terrorist act against the State of the Republic of Turkey and the countries in its region?

What was the intention of those who tried to guide us, even though the constitution of the State of the Republic of Turkey defines who can and will not be a terrorist organization, and the Taliban did not comply with this definition? Why was Islam's restrictive perception of women in the foreground, even though the religion of Islam showed how to treat women at the highest point by saying “Paradise lies at the feet of the mother”.

Who would be harmed to contribute to the education of this uneducated mass, who have been at war for forty-two years, deprived of school and education, and opened their eyes under the buzz of bullets at the front, and to contribute to the reconstitution of their country with the understanding of a modern state in a modern world that is at peace with its own Afghan people?

How right is it to hand over our own kinsmen and religious brethren to western imperialist monsters? Since this situation will not eliminate the assumed ignorance, what needs to be done is nothing but helping them in the sense of civilization of the Turkish people.

Yes, no matter what anyone says, I will continue to call out to everyone. We will act according to what the interests of my country, nation, and civilization require, not because others say. And we will meet with all groups necessary to ensure peace and tranquility in Islamic countries, especially the Taliban, and shape our international policy.

We will continue to contribute to the modernization process of Afghanistan, which started with Emanuel Khan in 1921, peaked in 1932, and was interrupted by Turkey’s entry into NATO.

Because we are the ancient Turkish Nation that went to the skies with AKINCI! We are the center of hope and light in our Geography.

More in this category: « Amnesty for the Coup Plotters of February 28, Never! Syed Ali Shah Geelani’s Funeral Prayer in Absentia »
Login to post comments
back to top