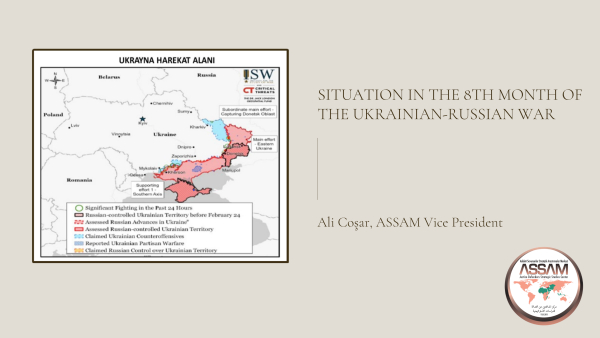 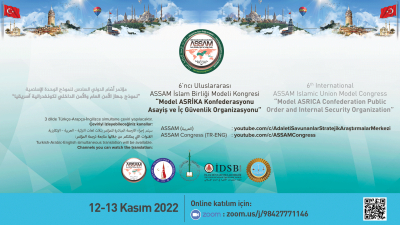 The aim of the International ASSAM Islamic Union Model Congresses is to make determinations on an academic and political basis regarding current problems in world politics, especially in the Islamic Countries, and to present a solution to the Islamic World and decision-makers about the necessary institutions for the gathering of Islamic Countries under a will and the necessary legislation for these institutions.

From the Turkish History to the History of Whole World... Overview of Russia and Ukraine (Very Important and Current Proposals and Things to Do) 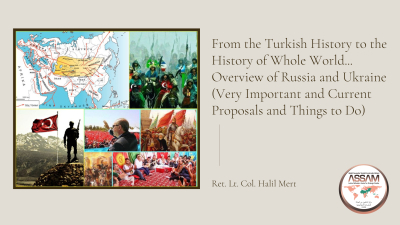 Strategy is the path followed to achieve a predetermined goal in the long run. Strategy is the science and art of using political, economic, psychological, military and spiritual forces together in the most effective and designed way in order to give maximum support to the policies adopted in peace and war by a nation or a group of nations. As can be understood from the definition; firstly,

There should be goals and objectives to be determined by taking lessons from the past and evaluating current conditions. Secondly, the paths to be taken to walk towards these goals and objectives. Who and what institutions will do what in the country after the targets are determined? What will supporter groups determined outside the country, NGOs and other allied countries should do? All of them must be studied.

Notice to the Muslims of the Russian Federation 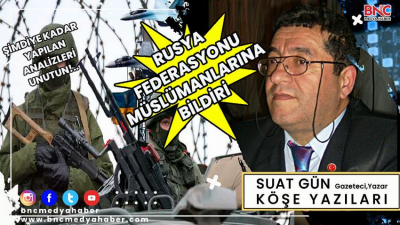 From the journalist author Suat Gün to the Muslims of the Russian Federation!..

The Occurrence of Russian Expansionism 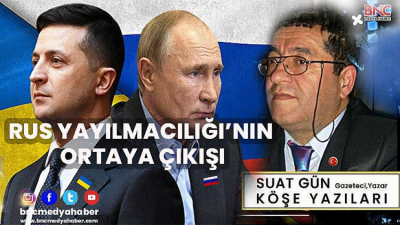 BNC Medya News columnist Suat Gün had said in his previous article ‘who Zelenskyy was’. In today's column titled “THE OCCURRENCE OF RUSSIAN EXPANSIONISM”, he also mentioned who Putin is and underlined that, contrary to popular belief, Putin is not a Russian but a Jew. In other words, the Global Jewish Capital drew attention to how the Russian and Ukrainian nations were fighting through two greedy Jews placed at the head of the two states. Suat Gün: “He pointed out that a fight for purposes was conducted by dragging both peoples of two countries to death through Putin and Zelenskyy. They are trying to realize the globalists' new world order plan.” by saying this he mentioned that (We see how right our teacher Prof. Dr. Necmettin Erbakan is.) Here is the full column of Journalist and Writer Suat Gün titled “THE OCCURRENCE OF RUSSIAN EXPANDATION”.

Nuclear Fiasco or Bluff of Putin!...

Journalist and Writer Suat Gün, unlike other analysts, from the first day of the conflict, he is making point shooting with his analysis!.. In this column, Gün evaluates Putin's "I use a nuclear bomb" statement. In addition, in the face of the Russian nuclear forces increasing the level of readiness and alarming; can Russia use these forces first of all? What happens it uses? How much does it use under what conditions? It also provides answers to such questions. Here is Suat GÜN's article titled “NUCLEAR FIASCO OR BLUFF OF PUTIN!...”

Russian Soldiers Thought It Was Military 'Drill'! The Truth Revealed During Interrogation!

The Ministry of Internal Affairs of Ukraine shared the videos and images of captured Russian soldiers. The Russian soldiers in the interrogation said that they were deceived and said, “There was a drill, that's why we came here.”

Introduction to the Invasion of Ukraine by Russia

From the first day of the invasion of Ukraine, every soldier, political scientist, sociologist, international relations expert, strategist or academician who appeared on Turkish TV and made comments; They talked about Russia's invincibility, Putin's legendary leadership, the destructive power of Russian weapons, and so Ukraine would be destroyed in a few days. Although we have come to the 7th day of the conflict today, the same people stubbornly continue their scientific errors by saying with the same logic that Ukraine will not be able to endure and that Kiev will fall soon. An incredible error of logic! If these people knew how the Chechen War had troubled Russia for 2.5 years, the most brutal and forbidden weapons, including vacuum bombs, were used against a nation of 2 million people, or if they had done a scientific investigation, they would not have talked like this.

HERE IS THE FIRST OF THE ARTICLE SERIES “INTRODUCTION TO THE INVASION OF UKRAINE BY RUSSIA” WRITTEN BY JOURNALIST AND AUTHOR SUAT GÜN!..

What and Why is Russia's Attempt to Occupy Ukraine?

“NEITHER USA-ENGLAND, NOR RUSSIA, NOR CHINA...

EVERYTHING IS FOR GREAT TURKEY.”

Is the Ukraine-Russia fight a modern-day event?

The gradual expansion of Russia after the disintegrating Golden Horde.

So, who are the Ukrainians? Have you ever wondered about its history? Do you know that most of the peoples who founded Ukraine are Turks?

Did not Ukraine become Ottoman territory?

UKRAINE IS NOT SUCH COUNTRY TO MAKE IT SURRENDER EASILY

On Monday, February 21, 2022, Secretary-General of the World Kashmir Awareness Forum, Chairman of the World Forum for Peace and Justice, Ghulam Nabi Fai and his team came to visit ASSAM. Dr. Mubeen Shah and Chairman of the Legal Forum for Kashmir, Nasır al-Kadiri, also attended the meeting, where ASSAM Vice President Ersan Ergür and ASDER Vice President Faruk Altunbay hosted them.

Ali Sirmen and Mine G. Kırıkkanat also joined the convoy to express their opinions on SADAT and ASSAM.

Young people are naive, they are inexperienced, they want to be famous, etc. They can make mistakes, I can understand that. However, I have serious difficulties in understanding how two experienced journalists like Sirmen and Kırıkkanat could make such a mistake.

I felt the need to give an answer to these two experienced journalists, even though it is not worth replying to young ones.

Published in News
Tagged under
Read more...
Page 1 of 17