Moscow is Uncomfortable with the Shusha Declaration! 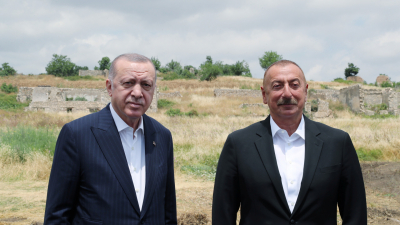 Turkey and Azerbaijan signed a declaration in the city of Shusha to increase cooperation in the military field. According to this declaration, Turkey and Azerbaijan have agreed to cooperate in the field of defense industry. In addition, our President had indicated that "a Turkish military 'base' will be established in Azerbaijan". Regarding the possibility of Turkey establishing a base in Azerbaijan, Kremlin Spokesperson Dmitry Peskov said “As we approach the deployment of military structures by NATO alliance countries near our borders, it may require us to take steps to protect our security and interests.”

In historical process; Sakha-Yakutia in 1632, Western Kazakhstan in 1731, Altai in 1756, the lands in the north of the Black Sea after the wars between 1736-1792, that is, at the end of the Russo-Turkish War of 1768-1774 and the south of Ukraine, where Turks and Muslims live, the Crimea and the North Caucasus were occupied by the Russians. The Russian siege turned interior from the external lines and directly targeted the Ottomans. Thus, with the Treaty of Küçük Kaynarca, a great retreat began, which lasted 156 years from 1774 to 1920. The Russo-Turkish War of 1877-78 marked the beginning of the collapse for the Ottoman Empire.

In the 19th century, they deported 1-1.5 million Caucasian people living on the Caucasus coasts, which they had completely dominated, to the Ottoman Empire and replaced them with Russians. In addition, during the 19th century, Muslim communities were forced to migrate to Ottoman lands from Kazan, Orenburg, Ufa and Northern Kuban in Eastern and Northern Russia, and the Idel-Ural region, where Kazan Turks and Bashkir Turks lived.

In the Soviet Union period, in order to prevent integration around both Islamic and Turkish identity, local nationalisms were supported, and the North Caucasus was divided into seven separate autonomous republics and autonomous regions between 1924-1936. Caucasian peoples and Turks are divided into mixed nations (Kabardino-Balkaria and Karachay-Cherkessia). With the settlement policy of Stalin, no Caucasian people were completely kept in their own lands, some of them were settled in various regions of Soviet Russia. Thus, conflicts broke out between the old and new owners of the geography, and unity could not be formed, especially among the Turks.

Now, Turkish Geopolitics requires the unification of East (Uyghur, Central Asia, Kazan Crimea) and West (Turkey and Balkans) Turks. The two biggest obstacles to this unification are Iran and Russia. On the other hand, the Turkish Eurasian approach, which sees Moscow as a strategic partner, is the Russian version of the approach of Atlanticism. In this approach, the entire Turkish geography, allied with Russia and Iran, is described as fragmented and occupied.

Russia is struggling to be effective in Central Asia and the Heritage of the Ottoman Empire, emptied by the USSR and even by the EU-USA. Therefore, the Eurasian approach is a betrayal for the Turkish Geopolitics. EU-USA is collapsing. The only two powers that will stand against us in Central Asia, the Middle East and the Arabian Peninsula which are abandoned by the West, will be Iran and Russia. They showed the first sign of this in Syria, Libya and Nagorno-Karabakh.

‘We have to pull ourselves together.’

More in this category: « Reflection of Mental Collapse: Islamophobia (January 9, 2015) Can the Long-Waited Peace for Twenty Years Come to Afghanistan? »
Login to post comments
back to top