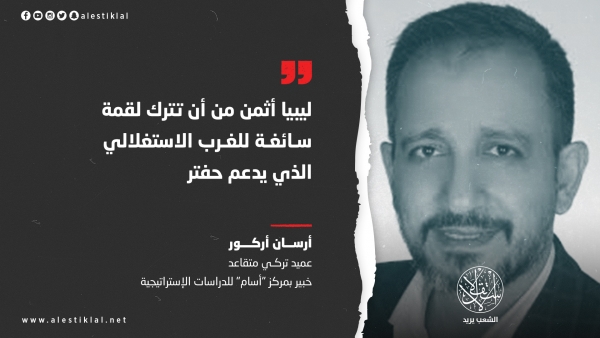 QUESTION-1; Judging by the recent developments in Libya, especially the Government of National Accord Forces training (with the support of Ankara), Russia's air support to Haftar and Turkey's warnings in order to prevent possible attack on its soldiers. How do you think the developments will be?

As it is known, most of the educated Libyan Army after Gaddafi was on the side of Haftar. For this reason, Haftar Forces were very influential in the country at the beginning and took control of many important places, especially oil fields. The training of the Government of National Accord forces, which were a little more dispersed and uneducated compared to Haftar's forces, by the Turkish Armed Forces, enabled them to gain an effective and powerful position against Haftar's forces. Of course, Turkey’s air support was also an important factor. When air superiority passed to the Government of National Accord, settlements under the control of Haftar units began to be seized one by one. This situation has shown both the world and Haftar units how serious Turkey is in Libya. They did not dare to do so because they were concerned that if an attack were carried out against Turkey's military units in the region, they could engage in effective operations in the region with air and naval forces in self-defense, as well as forming a situation that would lead them to lose their limited support in international diplomacy. Thus, Government of National Accord gained the upper hand in the region. Especially after taking back the strategic Al-Watiya Military Air Base in the west of the country from Haftar militias, the legitimate government, which has increased its morale and motivation, will accelerate its operations that will take full control in the region in a short time. With the support of Turkey, the Government of National Accord is fighting not only Haftar elements in the region, but also with many imperialist states, especially Russia, the United Arab Emirates and France. But with the help of Allah, with the support of Turkey, the troops associated with the Government of National Accord will soon triumph.

QUESTION-2; Turkey is pursuing a more subtle policy in Libya than in Syria. In this case, NATO's failure to reach a consensus on Libya and the support of Russia and UAE to Haftar's forces is obvious. In the future, will Turkey continue to exist until the Government’s forces take control of all of Libya?

The main reason for Turkey's subtle strategy in Libya is that Haftar's forces are seriously supported by various and strong states that are trying to gain strength before the UN. Supporting regional elements in the region without violating more strategic and international law, strengthens Turkey's hand before the United Nations. That is why this issue is so important.

Certainly, Turkey will remain in the region until an atmosphere of absolute and lasting peace and tranquility is achieved. In fact, this situation will continue until a new government of political stability comes to power with the free will of the people. But we must say that ensuring political stability in the region alone is not enough for Turkey to leave the region. It will continue to remain there until the necessary training services are provided after the Libyan Army is reorganized, equipped in terms of logistics and modern defense systems. It seems that the Western Countries will never give up their imperialist ambitions in the region. For this reason, it would not be right to expect the Turkish military to leave the region soon. Despite losing power while compared with the support of Turkey, the fact that they have so far supported Haftar and expressed they are ready to engage in any kind of relationship with the Government of National Accord. In this sense, their attempt to engage indirectly shows that this is also had an effect on the West. Libya is too precious to commend to the hypocritical West, which understands that Haftar is no longer able to gain influence in the region.

Turkey cannot maintain an absolute hostility strategy by states in the international arena. Countries have to act according to what their interests and the region's interests are. As a result, whether you accept it or not, the existence of the State of Israel is unfortunately a fact. It should not be forgotten that the states and governments responsible for the achievement of this situation will be condemned in the conscience of the people of the region. Of course, it is reasonable to make an agreement with the countries of the region within the framework of equity. Because an equitable sharing in the region will prepare a ground for an end to warfare and persecution.

But it is a fact that Israel and the West will not accept to any agreement in the interests of Turkey and the countries of the region. In absolute terms, Turkey will not sign an agreement with any enemy state, especially Israel and the Greek Cypriot Administration of Southern Cyprus, which will displace the interests of its Muslim brothers. Because in the final sense, Israel is an occupying state in the region, even if it is legitimate before the UN. For Turkey and the Turkish people, waiting for an agreement with these states until the Israel leaves the occupied territories, it is a dream and is not a correct determination.

The most reasonable course of action here is that Turkey first sign an agreement with Muslim states and then force Israel to an agreement in such a way that it surrendered to our own interests.

If there were a Morsi government in Egypt today, Turkey would never allow any hypocritical system, especially Haftar, to stay in the region. Unfortunately, Sisi's commitment to the United States like a puppet enabled the interests of Western imperialists and Zionist Israel. But I must say that this situation will not last very long.

QUESTION-4; Recently, the resignation of Rear-Admiral Cihat Yaycı as Chief of Staff of the Naval Forces Command has had great repercussion. One of the reasons behind this resignation is said to be related to Turkey's Libyan policy?

Rear-Admiral Yaycı had put forward an effective opinion on Turkey's interests, especially on the Eastern Mediterranean and the Libyan Sea Exclusive Economic Zone. And within this framework, the agreement with Libya suddenly turned the interests of the hypocritical states in the region upside down. This situation led to a successful performance of Mr. Yaycı rather than his discharge from military.

However, the fact that Rear-Admiral Yaycı's Turkish interests in the Aegean Sea are brought to the agenda before these issues are resolved may mean opening a new front. It may be possible that a change of mission was made due to the fact that this view, which occurred at the wrong time for this purpose, was not viable. But there is no clear information on this issue reflected in the Turkish public opinion. So, these considerations go no further than guesswork.

However, the Turkish Armed Forces is an ancient army with a history of thousands of years. This change of duty will never negatively affect Turkey's strategy.

QUESTION-5; Is there a consensus between Turkey and the United States on Turkey's Mediterranean policy?

There is no such consensus. It does not seem possible. Because the United States wants to establish a network of interests for itself, putting forward the interests of Israel and the Greek Cypriot Administration of Southern Cyprus, rather than Turkey, which is an ally in NATO. It knows that it is not possible to do with Turkey. Because the Natural Resources of the Eastern Mediterranean should be used in accordance with the interests of the people of the country which is on the coast of this sea. When Turkey acts with this understanding, it is not possible to have an agreement in the way it says.

QUESTION-6; What is the latest situation reached in Turkey-Greece relations and especially on the 12 Islands issue, and what effect have the developments in the Mediterranean had on this issue?

Turkey's interests in this region dates back to 1908. But in a general sense, the status of the islands was determined by the Treaty of Lausanne.

However, these issues should not be expected to be brought up yet. But it should be known that one day Turkey will certainly work for its interests in this region. But against a negative step that will be taken by opposite parties, Turkey will respond violently on the islands, as in Syria and Libya.

Of course, Turkey's maritime dominance, which began with Libya, may have worried interlocutors acting as outlaws in the region.

QUESTION-7; What is Turkey's relationship with countries such as Tunisia, Algeria and Morocco during the Libyan operation, and how did the operation affect these relations?

Answer; Turkey and the countries of the region have a friendly relationship that dates back to centuries. There has never been a problem between people. It is also a fact that after the First World War, there was a separation caused by the puppet administrators who led the countries of the region. But now the people and administrators have gradually noticed Western imperialist made mischief in the region. Turkey and the countries of the region do not have only geographical neighborhood unity. On the contrary, religion and Islamic brotherhood law take precedence. Therefore, a rapprochement has begun by these countries to Turkey, which is developing and is in an effective position both economically and politically. In the coming years, these relations will increase even more.

As long as we succeed in establishing our unity on the right interests.

I am happy to express my love and respect to the people of the region and my Muslim brothers. In the next period, it was time for the problems of the Muslims to be solved by the Muslim states and by themselves. For the last century, they have impoverished the wealth of the region with the weapons they bought for one lira and sold for ten liras. Moreover, they made us fight each other with the mischief they have injected us and watched us by rubbing their hands.

There is no reason why the next century should not be an Islamic century. From now on, we need to focus on our activities that increase our commercial and political cooperation with each other.

An economic and political bridge to be built in ASIA and AFRICA (ASRICA) will provide this more than we expect.

More in this category: « Who is Responsible for the Chaos in Libya? Omar al-Mukhtar Must Be Turning Over in His Grave »
Login to post comments
back to top