The Most Cursed Coup Attempt: FETO 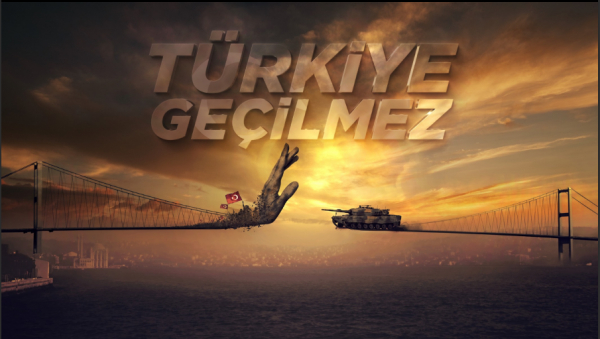 All the coups are cursed, but the July 15 FETO attempt was the most cursed one. What made the FETO coup attempt different from the others? Why was the FETO coup attempt, which we completely remember after 5 years, and of which remains are still being tried to be cleaned, the most treacherous and cursed? As a result of my observations and reviews, I will write and share my assessments with what I can determine.

As I said from the beginning, we could not and cannot forget because for the first time as a nation, we were stabbed very badly from an unexpected point and in an unexpected way. Previous coups were always carried out from the same point, namely by factions within the TAF that called themselves Kemalist, but were engaged in certain positions. The final coup was not like that; It was carried out by a structure that nestled in public, made itself accepted to the people with its religious mask, and even went further and recruited the children of the people without any intuition and turned them into mankurts. I think that was the most important difference.

The method it chose was also very different from the others. Infiltration method. The method used by Hassan-i Sabbah in history and successful, is to raise assassins loyal to him to death, to place them in the state authorities, even to the closest of the king, to the vizier, and when the time comes, to carry out the treacherous assassination, and then to commit suicide in order not to leave a trace behind.

From the end of the 70's, students were admitted to the Military Academy, NCO Schools and Police Academies and turned them into sleeper cells by making all kinds of concessions to hide it in order not to be noticed, until the last hit, keeping alive with religious suggestions, as if giving opium poppy, making surrender to himself without questioning, with narrow-minded brains to eat his dirt with pleasure, being loyal to him as if he worships more than Allah and the Prophet, by tearing them from their families and turning them into soulless and unscrupulous robots, by making his 1 dollar bouncers do the coup...

The tactic was actually perfect. It has been finely crafted for 40 years. It was impossible not to succeed. The TAF was captured, the Police Department was captured, the judiciary was captured, the media was largely under control, the ruling party was infiltrated, the opposition parties were largely captured. So much so that every position, up to the President's aide, was under control. In other words, only a miracle was needed for this coup to fail.

However, the only thing they did not take into account was Allah.

Allah did not let this noble nation to be enslaved to global colonialists.

“And ˹remember, O Prophet, when the disbelievers conspired to capture, kill, or exile you. They planned, but Allah also planned. And Allah is the best of planners.” Surah Al-Anfal: 30

Allah Ta'ala, the best of planners, hit the assassins with their own traps. The traps they had planned with the mentality of the staff officer for 40 years, down to the smallest detail, were turned upside down, with a little change at the last minute, the time of the attempt being pulled earlier, and being taken to daytime hours. When this disgraced and miserable FETO members, whose hearts are in a state of panic and fear like every hypocrite, started the coup a little early with a sense, everything got messed up. Our nation, which was not accustomed to kneeling, showed the traitors what they deserved with its magnificent rearing. This was the second epic of our people after the War of Independence.

However, these traitors, who had the U.S. state-within behind them, were so sure of themselves that they were making threats a few years ago by supposedly giving the president the date of his escape abroad, even they talked about making someone in their control was going to be President.

After all this preparation, the United States and other countries of the world were shocked, as even the American state-within and its servants, the real owner of FETO, did not expect such a defeat and the magnificent slap of the nation, which almost resembled an Ottoman slap. Moreover, FETO was their last and most important weapon in order to stop the Ottoman grandchildren and their leader, Erdoğan, who had awakened from his slumber and started to become the hope of all oppressed countries again.

Our state, which won the Second War of Independence by making history, has since that day started to make great breakthroughs in every field in 5 years. The assassin, who had infiltrated from the biggest shackles on his feet to the smallest units of the state, got rid of the wedges of the disgraced and miserable ones, and started to run by shaking and resurrecting like a heart patient who got up with the opening of the clogged blood vessels. Our state has started to show itself in the best way in every field, from its success in foreign policy, its production in the Defense Industry, its bringing terrorism to the point of extinction, and its service to the public. The future will be in favor of this noble nation. In those sad and sinister years of the War of Independence:

"Leaving determination by seeing the future as dark,

If there is a coward death, I am sure that is it."

Our national poet, Mehmet Akif Ersoy, who tried to stave off the complacency of the nation, would proudly express how the horizon began to shine with a magnificent light if he saw how this noble nation shook the dust off their heads and stood up with a resurrection...

So, will the colonial ambitions and greedy moves of the British, Zionist and American deep powers end? Will not they develop new tactics and strategies after their greatest hopes and their most dedicated servants in Turkey are defeated in this way?

Of course, the attacks of these imperialist mentality will not end. However, if we ensure our internal unity, if we always stand together as one against all imperialists and their servants, we will still make our history, if only three or five invading states and great powers come against us just like our people who went down to the streets as one body on the night of July 15, like our valiant man lying on the ground in front of the tank, like the emotional excitement of our young man who threw his shoes at the low-lying F16, like our children, the grandchildren of the Çanakkale martyrs, who resisted without leaving their position despite the downpour of bullets.

Even if they form not one but a thousand of FETOs, we will overcome it with help of Allah.

Whether they want it or not, Allah will complete his glory, the Islamic Union will be established and justice will be distributed to the world.

What difference does it make today or tomorrow, we will turn our eyes with this love, anyway...

In the end, it will be Allah's will.

More in this category: « July 15 Coup Attempt and the Victory of the Nation Relationship Between February 28, 1997 and July 15, 2016 »
Login to post comments
back to top